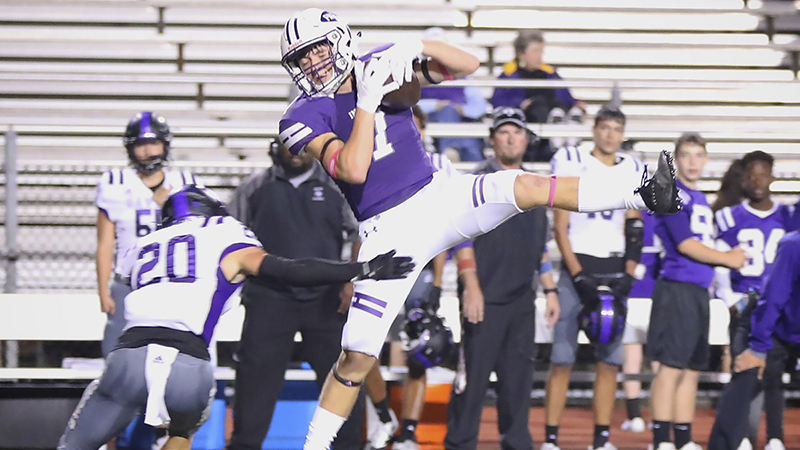 The Port Neches-Groves Indians wanted to execute better going into their game against the Dayton Broncos.

No more “shooting ourselves in the foot,” as head coach Brandon Faircloth had termed the Indians’ performance against Crosby, a 13-7 loss.

“We had a great week of practice, that’s usually what it comes down to,” Faircloth said. “I think we were highly motivated after a lack of execution against Crosby. It was a great night, great weather and we found a way to have some success and played great on defense, and that always helps out a lot.”

Nail caught 10 passes from Bost, the most that night of PNG’s receivers. He also ranks at No. 3 in District 12-5A-II standings for catches, with 33 so far this year. Faircloth calls him a complete player.

“He’s a hard worker, a solid player, great hands, great route runner, great blocker,” Faircloth said. “The way they played on defense opened some things up for him and Bost was able to find him. Our offensive line did a great job of protecting so he could get the ball to him.”

Sophomore running back Koby Trahan likewise had an incredible night. Just as Nail got his start in varsity as a sophomore, Trahan came out on the field on Friday to help cover for injuries among PNG’s running backs.

It didn’t take Bost long to learn that Trahan can handle a ball, handing him 13 carries and allowing Trahan to gain 85 yards for the Indians.

Faircloth said Trahan performed just as they hoped he would.

“We knew he’d do a great job and we were right,” he said. “He had a great game, didn’t miss a beat, protected the football, and got his first varsity touchdown.

“You never know until they get in the game, so it was great to see him relaxed and running hard, seeing that he can play at that level as a sophomore, we were really excited for him.”

The Indians’ defense managed to keep Dayton contained after the Broncos scored the first touchdown of the night, giving up only 181 yards of offense for the Broncos, compared to the 496 yards made by PNG. Senior defensive lineman Josh Patteson even managed to score one of PNG’s seven touchdowns of the night on a fumble recovery late in the first quarter.

“I was really proud of our defense,” Faircloth said. “Obviously we played really well, and any time you can find a way to score a bunch of points, it gives everybody confidence.”

That confidence will be carried onward as PNG hits the road to face the Santa Fe Indians (1-6, 0-4 in 12-5A-II) this Friday.

“It’s a tough away game.” Faircloth said. “It’s a long way from here, it’s a couple hours’ drive, and so we’ve got to have a great week of practice, which we’ve had so far.”