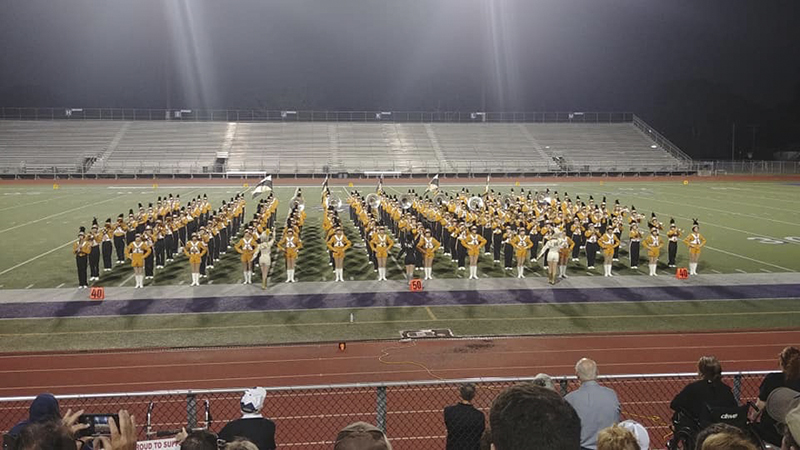 The Nederland High School Band received straight 1’s at the Region 10 UIL marching contest for the 32nd year in a row. (Courtesy photo)

Each band performed a pre-selected number of marches lasting between five and eight minutes. Bands are then ranked from poor to superior in four categories: brass, woodwind and percussion performance; ensemble performance; execution; and integration of marching components.

For Nederland High School, the Bulldogs keep the tradition alive of receiving straight 1’s in each category. This year was their 32nd in a row.

Band Director Greg Rose said this year’s performance was a good representation of where the students are musically and mentally.

“I felt like the kids had a really good performance,” he said. “They really improved the last few weeks and the kids are all excited about winning again. I’m always amazed at the work our students can do together and how far they are able to improve from August. They are able to work together as a group and perform as a group.”

Rose said they played traditional marches written for bands, but really challenged themselves with Robinson’s March.

“We played an old circus march that had a lot of pretty demanding technical parts,” he said. “That was the most challenging piece that we played.”

Although Nederland received an automatic bid to compete at area, Rose said they are choosing to end their competitive marching season at region and focus on the current football season.

“A lot of the bands will go to the area and reach for state,” he said. “For us, we traditionally go the route of leaving it all at region. We are going to focus on supporting our team at games, finishing the marching season strong and then transitioning into concert season.” 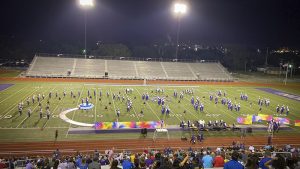 The Port Neches-Groves High School Indian Band received straight 1’s at the Region 10 UIL marching contest for the ninth year in a row. The Indians will head to the area competition at Galena Park ISD Stadium in Houston on Saturday. (Courtesy of Payton Lee)

The Port Neches-Groves Indian Band also earned straight 1’s, making it their ninth year in a row to advance to area.

“Their performance just got better every single week,” he said. “There has just been a lot of improvement and it was one of the best performances they had for the year.”

The Indian Band performed Polovtsian Dances, Symphonic Dances and Rhapsody on a Theme of Paganini.

“There’s a couple times where the band is really spread out, from the sideline to the back, so to get them to play together that spread apart is pretty challenging,” Pridgen said. “We also had each instrument group playing their own feature, so that was pretty challenging, too”

Port Neches-Groves is advancing to the UIL Area Contest this Saturday at Galena Park ISD Stadium in Houston.

“We’re super excited,” Paganini said. “They’ve worked really hard since our first contest and they’ve made a ton of improvement. We are excited that they get to go to area and represent us well, and we are confident that they will.”