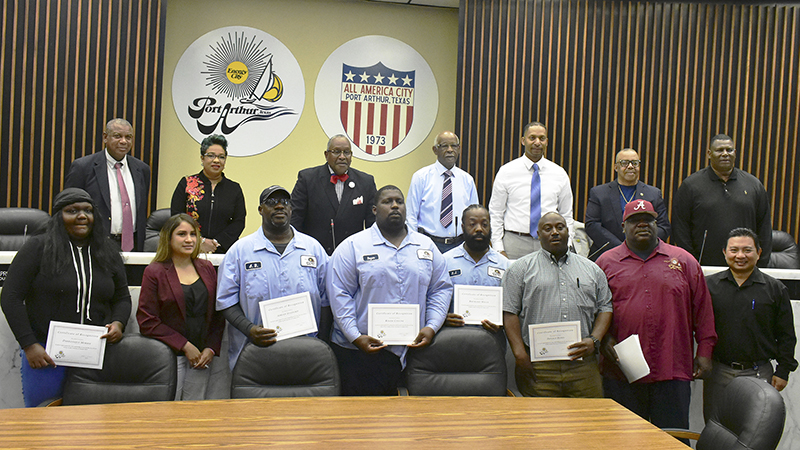 Port Arthur Council members and public works employees pose with their certificates of recognition for their work on the city’s streets during Tuesday’s city council meeting. (I.C. Murrell/The News)

The city of Port Arthur is going to use a vehicle provided by Infrastructure Management Services of Tempe, Ariz., to help determine the most immediate needs for road repair.

IMS will provide the city the truck at a cost of no more than $98,500 as part of a roadway rehabilitation plan that will work for up to five years.

Port Arthur City Council members approved a measure this week to enter into the contract with IMS.

Interim City Manager Ron Burton said he hopes the truck will be purchased within the “next few weeks.”

Public Works Director Alberto Elefaño said data from the vehicle’s software will give each road a score based on its needs for repair.

“The ultimate goal is rehabilitate all roads,” Elefaño said. “But the council will set goals based on this data for the repair of the roads. It’s a year-by-year process, so the goals for repair could change. If our goals change, we’ll revise our plan.”

Burton explained as the vehicle is driven and an x-ray is done on each street, the vehicle generates an electronic reading of the street’s substructure and provides related data.

“It will do a condition analysis,” Burton said. “It’s a planning tool to prioritize your streets. It will help you in your future planning as to how to handle the maintenance, conditioning and reconditioning of the streets.”

“That employee would then come back and say, ‘I went down this road, and this had more potholes than the other,’” Burton said. “Now, we’re taking a scientific approach.”

Other cities have used such technology in their road rehabilitation, according to Burton and Elefaño.

“Without the software, it’s hard to say which roads should be repaired first,” Elefaño said. “This will help from a cost-benefit analysis.”

Elefaño also commended the work of several employees within his department for recent projects they completed. Recorded phone calls from two Port Arthur citizens acknowledging the department’s work were played to the council on Tuesday.

One of the calls came from Randy Haltom, Port Arthur city councilman from 1984-88.

“I was real impressed by how they didn’t just do it, they made sure it was done right,” Haltom said on the recording of two employees. “… Employees sometimes get beat up because they don’t do a good job, but they really did well and I want to thank them and thank you.”

Said Councilman Cal Jones: “Anybody who fixes potholes is my hero.”