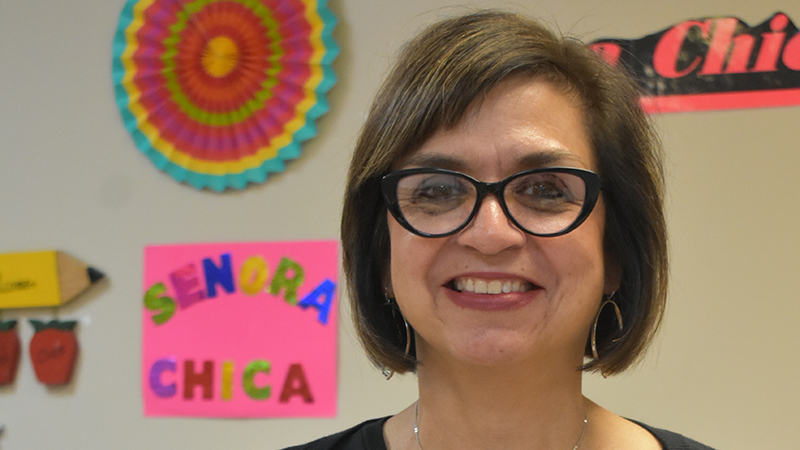 Diana Chica has been cancer-free for 12 years. (Mary Meaux/The News)

Wednesday is when Diana Chica wears her pink during Breast Cancer Awareness Month.

“Family gives me strength – faith gives me hope,” her black and pink shirt reads. And this statement rings true for the breast cancer survivor who recently told her story in the Memorial High School newspaper, The Titan, where she teaches Spanish III Pre-Advanced Placement and Spanish IV Advanced Placement.

On a recent visit to the school she told of how her journey began with a conversation with Melissa Oliva in 2007, when she was working at the Ninth Grade Center. They got to talking about mammograms and Chica, then at age 43, said she had never had one.

“Breast cancer doesn’t run in my family. I really thought it had to be on my mom’s side of the family,” Chica, a naturally upbeat person said.

She had no symptoms, she said, yet scheduled and went through with the appointment. Then came the phone call she did not expect with news of a diagnosis of breast cancer.

Her options were either lumpectomy or total removal of her breast. She chose lumpectomy, which was followed by six weeks of radiation and five years of hormone therapy.

“I cried one day… one day,” she said using her index finger to indicate the No. 1.

She was scared and didn’t want to fall into a state of ‘powerlessness,’ she said in her Titan news story.

Just one week after surgery, the now retired school administrator Bannister Baptiste called and asked if she wanted to come back to work. Chica did. This was something she needed emotionally.

She went to the school at 6:30 a.m. and her radiation oncologist opened the doors a little early, so at 7 she was receiving treatments. Then she returned to the school while she still had a drainage tube in her body. She did therapy — certain arm movements — while on break.

Today, she is 12 years cancer free.

“A cancer diagnosis is anything but easy, and while it can change a person’s life in a myriad of ways, sometimes God changes it for the better,” she wrote. “My advice to women is to take action and get a mammogram. They certainly do detect problems very early to save precious lives. To anyone battling breast cancer, sometimes the battle in your mind can be just as tough as what’s going on with our body, so it’s important to stay positive and surround yourself with positive people.”