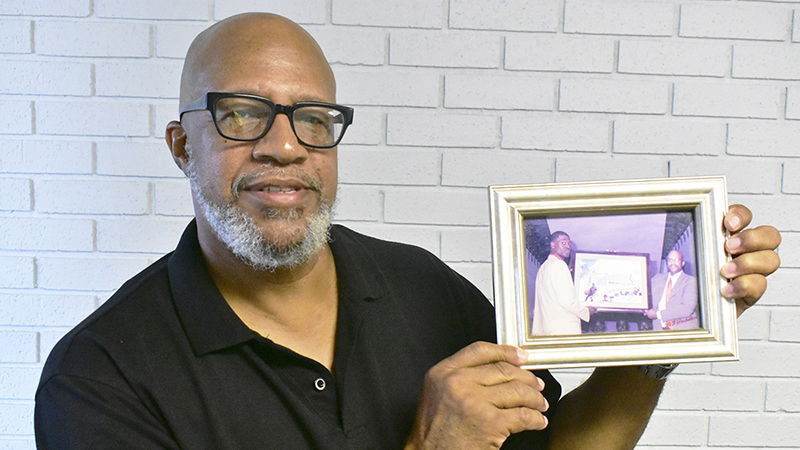 Igalious “Ike” Mills presented Earl Campbell a painting of the house in which he grew up.

Campbell, after the success of his NFL career with the Houston Oilers and New Orleans Saints, had built his mother a brand new house. Mills wanted Campbell to have something to remember the home he lived in when he won his 1977 Heisman Trophy playing for the University of Texas.

It was the first of such paintings that Mills would provide, for free, to the people and athletes he would meet throughout his life.

On Saturday, the Nacogdoches native now living in Port Arthur will present the legendary NBA player Julius “Dr. J” Erving with his own painting at Lamar University’s Tip Off Banquet at the Montagne Center in Beaumont. Erving will be the keynote speaker.

These paintings, more than Mills can count, are the former Lamar basketball all-conference player’s own way to give back to a game that has opened so many doors for him.

“Being a basketball player, you can understand that, after the lights and everything is over with, you have to sit down and evaluate yourself,” Mills said. “For me, it gave me an insight into the athletes’ private moments, which is basically my inspiration. I wanted to focus on the positive aspects and sides you don’t get a chance to see, like building their mothers a new home. It might not mean a lot to a lot of people, but for them that’s one of the major things they like to do once they actually start making money.”

For Campbell, and for many of the athletes he paints for, Mills wanted him to remember important things that aren’t just centered on himself.

“Those are the things that athletes will really remember and feel really close to,” he said. “It’s not so much a picture of them, and that’s why I’ve maintained this whole process and gotten good feedback from a lot of these athletes. It’s not about them.”

Mills played for Lamar under coach under Jack Martin, graduating in 1977 as the first African American to complete the school’s Bachelor of Fine Arts program. Mills’ style is inspired by abstract expressionists like Willem De Kooning and Hans Hofmann, while also taking inspiration from Warren Brandt and Port Arthur native Robert Rauschenberg. Mills maintains that Rauschenberg had a piece of his in Rauschenberg’s own private collection.

“His whole concept of taking stuff, from streets or anyplace, and putting it into his artwork, some of my artwork I do the same thing,” Mills said.

Mills creates his art in series, taking what he feels at the start and allowing the spiritual aspect of his inner thought process to take over and reveal what’s going to happen. He doesn’t always know where they’re going to start out or how they’re going to finish.

His current series includes a painting for Kareem Abdul-Jabbar, the six-time NBA Most Valuable Player and 19-time NBA All-Star. As is his style, the painting was something abstract rather than of Abdul-Jabbar himself.

“He thought it was going to be a picture of him, and after he saw it was something different, we ended up talking a lot longer than either of us anticipated,” Mills said. “That was after his house burned down, he lost a lot of his artwork, jazz collection, the whole nine yards.”

Erving’s painting will be from the same series, though Mills is keeping what the painting is going to look like close to the chest.

Mills chose Erving because of the enormous influence he had on basketball worldwide, and to show Erving when he comes to Southeast Texas that he can take back something valuable, but something that can’t be bought in a store.

“I wanted him to have time to sit down and really reminisce and see that it’s not really focused on him,” Mills said. “Most of the players, in their private life, they think so much about themselves. That why this, for me, has been successful. Approaching other people and getting things done with the other athletes, and plus having the opportunity to be in Southeast Texas, I think that’s a great thing for the Lamar program.”