Strength in service: Memorial High students give back to Hamshire-Fannett 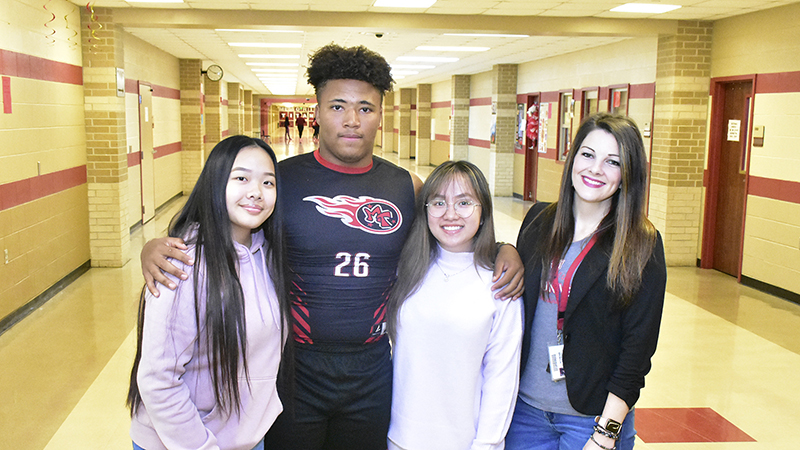 Memorial High School’s next football game wasn’t for another three days, but some football players got to put on their jerseys for a road trip to Hamshire-Fannett High.

No, Port Arthur’s team wasn’t taking on the Longhorns. Nine of the Titans joined Memorial’s National Honor Society members in giving back to the Longhorns.

“Whenever we had our National Honor Society go, a lot of them couldn’t go because they have co-enrollment so they go to Lamar [State College] Port Arthur,” Memorial NHS sponsor Lily Bronson said. “So, I got with [head football coach Brian] Morgan and said, ‘Hey, can we use your football players?’ So, he sent nine of his football players, and that’s who went.’”

The Memorial cohort visited with teachers and students of Hamshire-Fannett Middle School, who are currently housed at the high school in Hamshire due to extensive flood damage from Tropical Storm Imelda last month.

Memorial NHS President Jenna Khuu said the idea to help H-F was borne from posts on Facebook that Bronson came across.

“We have our own officer group chat, and we were talking amongst each other, and that’s how it started,” Khuu said.

NHS member Jami Trinh said the Memorial students gave school supplies and cold-weather wear, items that many of the H-F students lost in the flood. They also gave $200 in gift cards to the affected teachers.

Hamshire-Fannett officials could not be reached for comment on the Memorial visit, but for senior football player Jonathan Artis, it was a chance to return a favor H-F students did for Memorial in the aftermath of Hurricane Harvey two years ago.

“I had a Snapchat friend that came back and said, ‘I appreciate everything you did to me and then with us and gave back to our school, because they had given back to us like we did to them,’” Artis said. ‘[The friend continued:] ‘Nobody does this just regularly, and Port Arthur was the only one that thought about us.’”