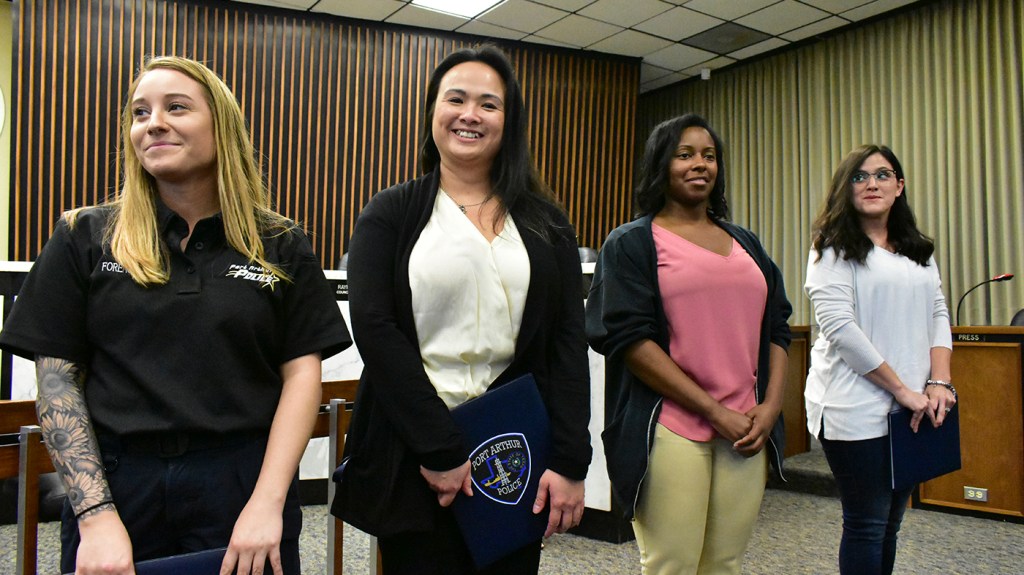 From left, Mallory Cruz (forensic specialist), Stephanie Bui (telecommunications dispatcher, or TCO I), Venisha Gaines (TCO I) and Christian Gutierrez (telecom supervisor, or TCO II) have been installed into their respective positions with Port Arthur police during a ceremony Monday. (I.C. Murrell/The News) 10-21-19

Since Sept. 1, telecommunications officers in Texas have been classified by the state as first responders.

“That position has gone through an evolvement over the past several years,” Fratus said. “Prior to this legislation, they became certified, so this is a state-certified position now. In [the state] naming them first responders, it opens them up to benefits, like mental health benefits. 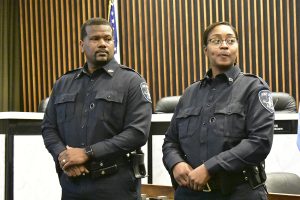 Everett Cormier and Latavia Joseph prepare to be sworn in as Port Arthur police officers during a ceremony Monday at city hall. (I.C. Murrell/The News) 10-21-19

“Everybody knows that’s the first voice. They’re speaking with complainants, so just as we recognize police officers and firefighters are exposed to things that could cause them some strife, we also have to recognize those dispatchers are actually the ones on the phone with those people. Titling them officially a first responder, just one of the many things that’s helpful, is that it opens up to assistance in mental health issues for one of the many things they might have experienced while doing the job.”

Fratus addressed the importance of the recent legislation during an induction of three telecom officers, a forensic specialist and two police officers to the Port Arthur Police Department at city hall Monday.

Christian Gutierrez was promoted to TCO II, or supervising telecom officer. Stephanie Bui and Venisha Gaines were installed as dispatchers.

Mallory Cruz was inducted as the forensic specialist.

Two Beaumont natives received their police badges Monday, as Latavia Joseph, 31, and Everett Cormier, 39, were sworn in. Joseph’s experience includes security work for a number of Houston businesses and officer duties at Prairie View A&M University and the Beaumont ISD.

“I decided it was time to take the next step up and do it on the streets and help as many people as I can on the streets,” Joseph said.

The desire to work the streets never left Joseph from her days as a youth.

“I started off doing security and just decided, ‘OK, this is something I’ve always wanted to do. Go to the police academy and do it,’” Joseph said.

Cormier said the Port Arthur Police Department has “good things” going, as does the city itself.

“I always wanted to work under [Chief Tim] Duriso and work for him,” Cormier said.

Cormier started after high school working as a corrections officer for a year. During this stint, he attended police academy during days while working 12-hour night shifts.