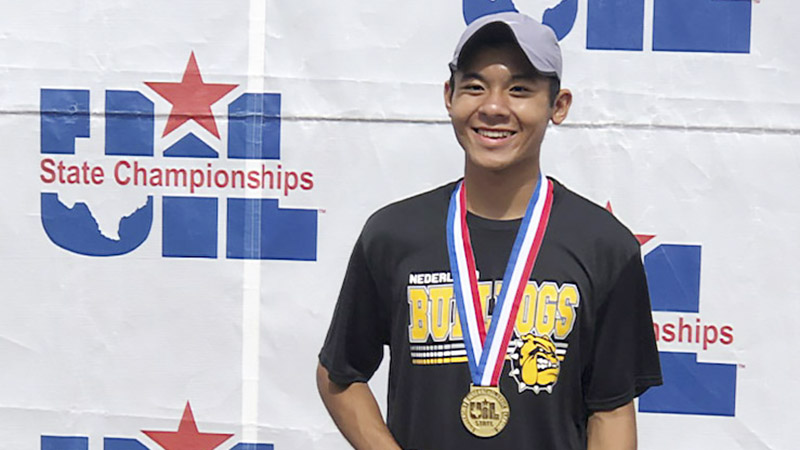 Brandon Do of Nederland poses with a gold medal and plaque for winning the 2018 5A boys singles state championship in College Station. (Courtesy photo)

Nederland made it to the second round in the UIL 5A Region III team tennis tournament, losing to Shadow Creek in the quarterfinals 10-7, but the team is looking forward toward the spring and for their players to defend their state championship titles.

“I’m a little disappointed in that sense, but I’m happy that the kids improved,” said varsity coach Jorge Lopez. “We lost seven of the eight boys we had on the varsity team last year so these are all new kids. I hope they really work hard because they’re young and they’re new. But we got a second place rating, so it wasn’t too bad.”

It was a hard fought tournament for the Bulldogs, long hours spent playing against the region’s best.

“For the second match, it was one of the longest nights we had,” Lopez said. “We started at 3:30 p.m., finished doubles at 7:20 p.m. and then we started playing singles and the matches weren’t over until close to 10 p.m. Really they could have gone either way, we had a lot of 3:30s that we lost. If we’d won we would have gone to the final four in the region, which we haven’t done since 1993.”

Siblings Brandon and Megan Do returned this year after Brandon won the state championship for boys singles in 5A and after Megan came in third for girls doubles with Jayci Wong. Jayci, who graduated in May, is currently playing for Lamar under her father, coach David Wong.

“Brandon and Megan have been playing since they were little,” Lopez said. “Brandon is No. 10 in Texas. He’s going to play tennis in college next year, and he’s got a few offers from different places, with Lamar being one. He’s constantly improving himself, though. He might even play somewhere else even better after a few years. He plays amazingly.”

Among the newcomers to the team this year is Connor Junot, who partners with Brandon Do for doubles. Lopez said he sees a lot of promise in Junot.

“Besides Brandon our best record is from Connor. He’s a good athlete and he’s only lost one singles match,” Lopez said.