Spirit Halloween returns: “We are happy to be back in Port Arthur at the Central Mall” 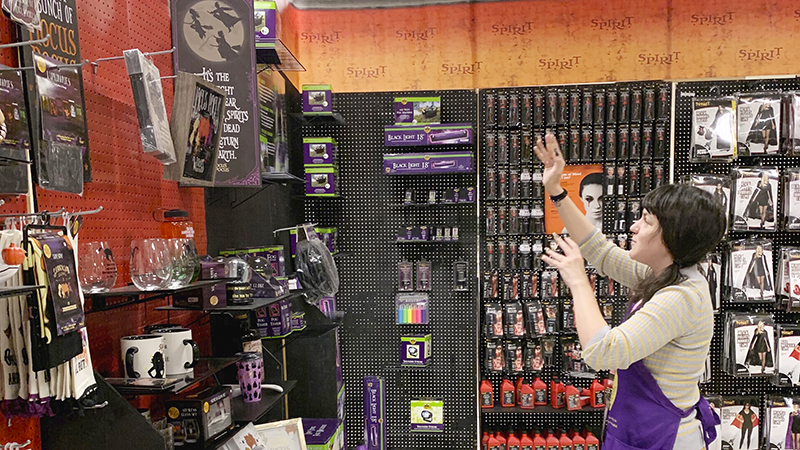 If you Google the word “Halloween,” you’ll find amongst the scary movie videos, pumpkin photos and History Channel articles that Spirit Halloween is listed midway down the first page, marking it as the world’s No. 1 Halloween costume store.

Stores around the country begin to pop up with the turn of fall season, doting Freddie Krueger masks, The Nightmare Before Christmas decor, Disney character costumes from the newest movie to the oldest originals. They have ’50s-style costumes, cops, steampunk, spoofs, makeup, masks, props and more — and as quickly as the stores arrive, they seem to be gone just as fast. 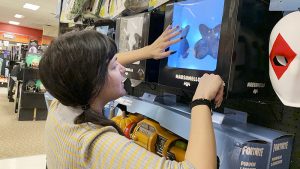 Juliana Babington, 28, shows off one of the most popular costumes at Spirit Halloween, Marshmello from “Fortnite.” (Cassandra Jenkins/The News)

“Halloween is about fun,” Linda Smith said. “It’s about make-believe, dress up, scary, funny, whatever you want to be.”

Smith, independent owner of nine Spirit Halloween stores across Texas, including the Beaumont and Port Arthur locations, said she lives for Halloween — literally.

“I love Halloween,” she said. “I started in 2006 with my first store in Beaumont. There was a lot of mom-and-pop shops then and unfortunately, a lot of them have gone away. Back then I was just another Halloween store. Now, we own Halloween.

“When people see a Spirit sign, they know no matter what store they go into they are going to have the same experience. That’s our goal. That’s our purpose for being here, to bring Halloween to everyone.” 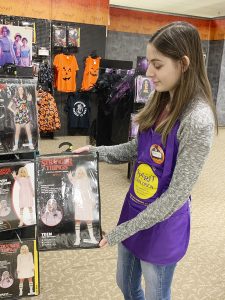 “[Marver] started dry cleaning high-end fancy Halloween costumes in the 1980’s,” Smith said. “People would bring them in and tell him to just keep them. So, he started renting them out for Halloween and different events. He made it into a business and called it Spirit Halloween. He was so successful, that he decided to get his family involved in it around the world. It worked and the business started to grow.”

In 2006, when Smith acquired her first store, the company owned and operated around 300 stores. Now, they own upwards of 1,400 stores across the U.S. and Canada. 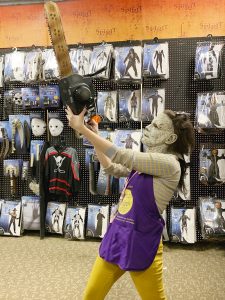 Workers from the Spirit Halloween’s location in Port Arthur Central Mall test out the store’s motorized chainsaw prop that pairs with the Michael Myers costume and mask. (Cassandra Jenkins/The News) 10-18-19

Smith attributes the store’s success over time to their opening-closing dates and interactiveness.

“The difference between us, and any competitor out there, is that they are trying to get rid of all their stuff,” she said. “If you go in those stores the last week of October, they look decimated and we’re fully stocked. We look like the first day we opened in August. We don’t want to be out of business on Halloween, we are in business for Halloween. That’s the difference.”

Smith said Spirit Halloween stores standout from others by designing their locations to be interactive and open.

“Our store is touchy-feely, the bells go off, the music is nuts, everything goes off,” she said. “You can touch it, feel it, play with it and stamp on it. We encourage that because we want you to be part of the experience here in the store.”

WORKING FOR THE STORE

Smith said another large portion of what makes her stores great are the workers who bring energy, fun and a love for Halloween to each and every day.

Juliana Babington, 28, is working this year for Spirit Halloween, loving every second.

“Honestly, I have been a Halloween nut ever since I was a little kid,” she said. “Working at a Halloween store is like a dream. When they recruited me on, I was pretty excited. You don’t realize all the work that goes into it because we just start with an empty store and build all of it from the ground up.”

The Port Arthur native said her favorite part is seeing customers pick out their favorite costumes.

“It sounds cheesy, but my favorite part is the little kids,” she said. “Seeing them and they are shrieking about all the things they can be is great. They’ll be in the dressing room and I’ll hype them up. If the kids are happy and they smile and giggle, it’s a good day.”

Babington said the store’s most popular costumes so far have ranged from Michael Myers to Toy Story, but the costume that has been sold out the most is a Spirit Halloween exclusive — Fortnite.

“We have a Fortnite section,” she said. “The kids see it and they scream, freak out and want to be those people. We’ve got the little Marshmello head that lights up. The costume that we can’t keep on the shelf is our Drift one, which looks like a fox. We have sold out of it and we just got some back in. That’s how intense it is for kids.”

Babington said while she has another job lined up for after the season, she is putting her full time and attention into Spirit Halloween while it’s here.

“I love Halloween,” she said. “I wish it was year round because it has been like a dream working here, but I’m going to give it my full focus until the end.”

This year, in addition to the Beaumont location, Spirit Halloween is open in Port Arthur for the first time since 2010-11.

“We are happy to be back in Port Arthur at the Central Mall,” Smith said. “It’s probably one of the best locations we’ve ever had. It’s 10,000 feet of Halloween costumes, décor, accessories and makeup. You want it? — We got it.

“People come all the way from Evadale to Winnie to see these stores.”

Spirit Halloween, in partnership with the Central Mall, will be hosting a fashion show by TJ Maxx from 11 a.m. to 1 p.m. today.

With Halloween taking place on Oct. 31, Smith said the store would have a big closeout sale Nov. 1-3 with all store items 25-50 percent off.

“It’s a lot of fun working for us,” she said. “It’s a lot of grunt work, but the fun begins once we open the door. Greeting our customers, doing the Spirit of Children, ringing the cow bell, seeing little kids eyes light up when they try on their costumes — it’s a lot of fun.

“We’ll be back next year and we are hoping to be back in the same spot if the mall has it vacant for us, and we can’t wait to be back.”

For more information, visit spirithalloween.com. The Port Arthur Spirit Halloween is located in the Central Mall in the old Sears space.