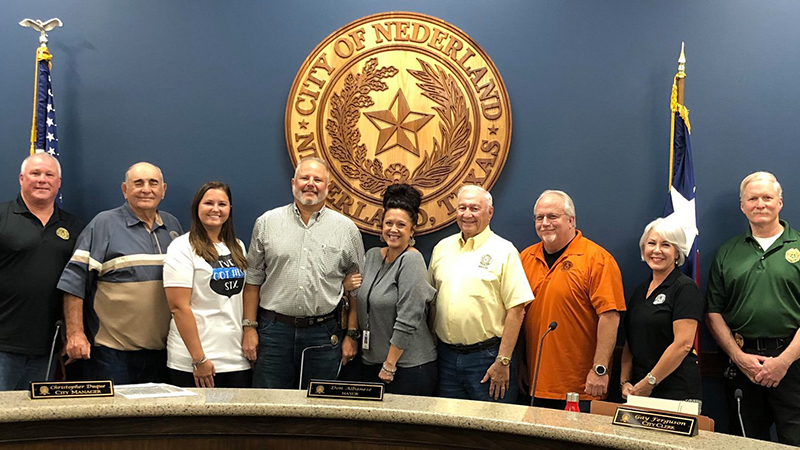 David Odom, fourth from the left, was recognized this month at Nederland City Hall.

NEDERLAND — Describing himself as an “outsider from Beaumont,” David Odom said it was former Police Chief Billy Neal who gave him a shot at career with the Nederland Police Department — something for which Odom is very grateful.

“I had only been to Nederland, maybe twice. He gave me a chance, gave me that break I needed to prove myself,” Odom said. “I’ve been indebted to Chief Neal and the City of Nederland ever since. I enjoyed serving the citizens and city.”

Odom, who began working with the NPD in June of 1994, officially retired last month, marking 25 years of service.

Odom was recognized for his service this week in front of the Nederland City Council, a governing board that now includes Neal as mayor pro tem.

According to Neal, Odom was the type of officer who didn’t need to be told twice to do a job.

The former chief also said Odom was the first Nederland policeman to write 100 tickets in a single month, noting Odom predicted he could do it before he actually did.

Upon hearing the story, Nederland Mayor Don Albanese immediately joked, “do you need a job?”

Before accepting a gift certificate and cake, Odom told council members and those in attendance that he could write tickets without even looking at them, joking that today that skill isn’t needed because digital ticket writers are common.