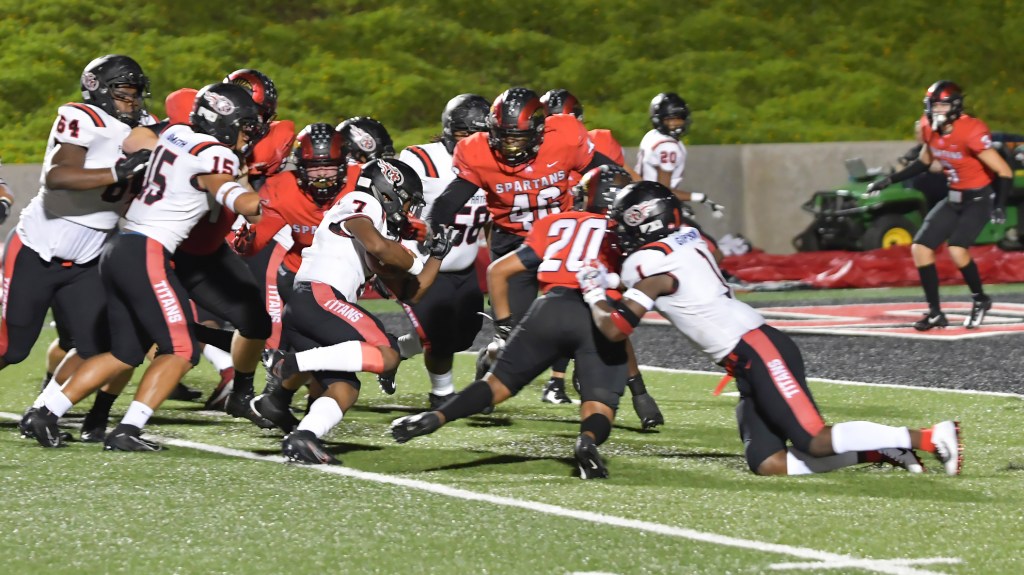 Memorial quarterback Jah’mar Sanders keeps the ball deep in the red zone against Porter on Friday night in New Caney. (Jereem Augustine/Special to The News) 10-18-19

NEW CANEY – Branden Chaney rushed for two touchdowns but it was not enough for the Titans as Porter scored a late touchdown to secure a 21-14 win over Memorial Friday night in District 9-5A-1 action at Randall Reed Stadium.

After a scoreless third quarter, Memorial scored early in the fourth quarter to tie the game at 14-14. The drive was set up by a great defensive effort by the Titans, who forced a third straight three-and-out by Porter in the third quarter. A 38-yard punt and 16-yard return gave the Titans the ball at the Spartan 24. 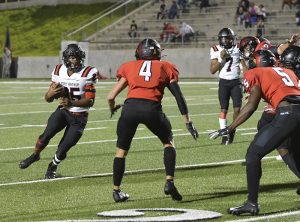 Jerel Taylor of Memorial totes the football as Porter’s defense closes in during the first half Friday night in New Caney. (Jereem Augustine/Special to The News) 10-18-19

Consecutive 5-yard runs by Brian Milton, who replaced an injured Jah’mar Sanders, and Chaney put the ball at the 14. Milton hit Tavian Gipson for 12 yards to the 3. Chaney scored two plays later on a 1-yard run to tie the game.

Porter (6-1, 4-0) forced a Milton fumble on the Titans next possession, which was recovered by Jordan Lewis. The Spartans scored three plays later. Baron Bradley scored on a 9-yard jet sweep to give Porter a 21-14 lead with 3:27 remaining in the game.

Memorial (3-4, 2-2) mounted one last drive to tie the game. Milton hit Alex Ned for 12 yards and followed with a 16-yard completion to Jessie Cornell to put the ball at the Porter 45. Milton and Cornell connected again for 19 yards, but Cornell fumbled the ball trying to get some extra yards with 2:09 left.

Porter was able to get one first down on a 30-yard run by Bradley to put the game away. The Spartans were able to line up in the victory formation to end the game.

After the defense forced a three-and-out on the Spartans opening possession of the game, the Titans offense put together a promising drive. A 15-yard run by Sanders was followed by a 7-yard run by Chaney. Sanders hit Tavian Gipson for 12 yards to put the ball at the Porter 24. A costly holding penalty thwarted the drive, which ended with and incomplete pass on fourth-and-12 at the 26.

The Spartans didn’t waste any time on their next possession. Reilly hit Trace Knight on a 74-yard scoring strike on the drive’s first play to give Porter a 7-0 lead with 7:20 left in the first quarter.

Memorial took advantage of a Porter miscue on the Spartans next possession. Forced to punt from their own 35, the snap sailed high over the punters head and was recovered by the Titans at the Porter 4.

Chaney scored two plays later on a 2-yard run to tie the game at 7-7 with :13 remaining in the opening stanza.

Memorial was only able to advance the ball five yards on a Sanders run. Bryan Galvan came on to attempt a 35-yard field goal, which was blocked by Porter’s JoJo Guillory.

Memorial was driving late in the second quarter, but Sanders was intercepted by Austin Perkins with 24 seconds left to keep the score 14-7 at halftime.

THE GAME CHANGED WHEN…
Brian Milton was tackled and fumbled at the Memorial 23 yard line. Porter was able to score the go-ahead touchdown three plays later with 3:27 left in the game to secure the win.

THE GAME BALL GOES TO…
Braden Chaney who rushed for 50 yards on 21 carries and scored both of Memorial’s touchdowns.

UP NEXT…
Memorial returns home next Friday to host Kingwood Park for Homecoming at 7 p.m. The Titans are back on the road the following week at Houston Wisdom on Saturday, Nov. 2 at 1 p.m.