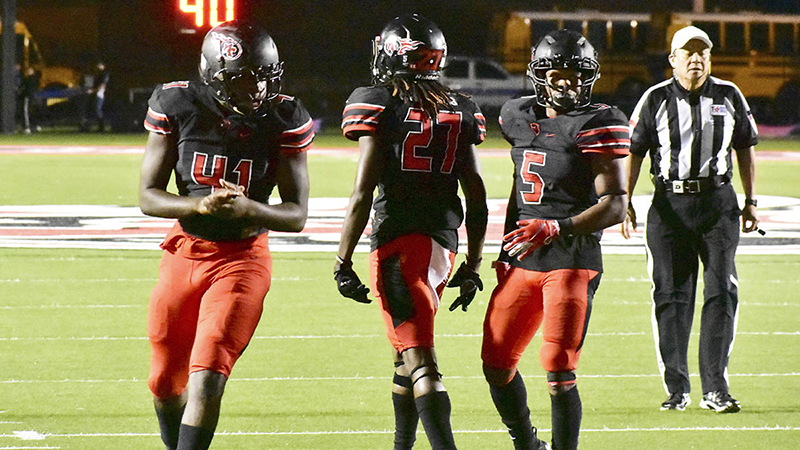 The Memorial Titans will have another challenge as they travel to New Caney’s neighbor Porter tonight, with the two teams matched well on offense so far this year.

Although, Porter’s defense may have a few tricks up its sleeves for Memorial’s passing game.

Last year’s matchup between the teams also followed a loss at the hands New Caney for Memorial, which the Titans responded to by trouncing the Spartans 48-20 in Port Arthur. Whether this year will produce quite the repeat, Memorial head coach Brian Morgan is not too worried about it.

“We’re going to go out there, play our game, play it fast,” Morgan said. “Their receiver’s a really good player, and they play two quarterbacks and both of them do a good job at making accurate throws. We’ve got a good test ahead of us.”

That test will come from Porter’s defense, which has allowed by far the fewest yards in District 9-5A-I at 888, which is 598 fewer than New Caney’s second best total of 1,486.

Only 312 of Porter’s total yards allowed came from passing. This could potentially hold back Memorial sophomore quarterback Jah’mar Sanders, who has thrown the most in the district with 127 attempts, the only quarterback in triple digits.

Porter is also tied with New Caney for most interceptions caught, with Spartans junior Luke Cordle and senior Carter Crochet making 3 and 2 respectively, and each with one of the 3 touchdowns returned from interceptions.

With his substantial passing attempts, Sanders is also marked as having the second most interceptions in the district at 8.

Morgan believes more in his players than he does in the numbers.

“We don’t think much about them,” he said. “There’s a lot of things going into those numbers that don’t have anything to do with football, so it’s not something I’m concerned with.”

Sanders will be competing against the Spartans’ own offensive playmakers. Senior quarterback Jack Reilly has found his receivers with the best completion rating of the district at 62.34% and totaled the district’s second highest yards through passing.

Senior Baron Bradley has the highest average yards per catch at 28.41 and the most touchdowns at 8. Senior Trace Knight has 17 catches for 239 yards and 3 touchdowns, tied for seventh in most points with Memorial’s Kason Williams at 30.

“We’ve got a good game plan to get the ball out,” Morgan said. “We’re going to get it to the playmakers and we’re going to go about doing that just like we do every week.”