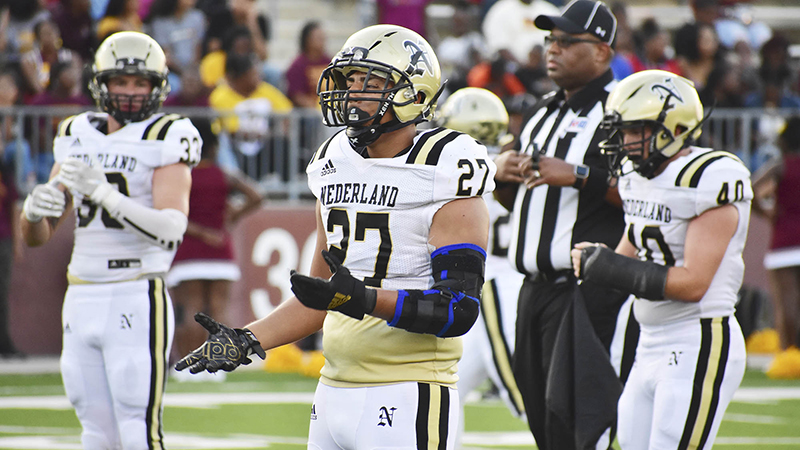 The Baytown Lee Ganders are likely going to want a win after coming back from a shutout loss to Barbers Hill 28-0 last week. They’re still 4-2, but those two losses came from District 12-5A-II games making their district record 1-2. The Nederland Bulldogs will work to stop that from happening this Friday in Baytown.

The Bulldogs racked up points early in the game against the Ganders last year, taking a commanding 41-14 after scoring on their first five possessions, going on end the game 55-21.

This year it will be a contest between Baytown Lee’s rushing, 1,223 yards total and third in the district, against Nederland’s passing, 1,128 yards compared to Baytown Lee’s 953.

The Ganders’ quarterback, senior Ijenea Wooley, and running back, junior Ja’kenan Davis, are just behind Bulldogs junior running back Josh Mazyck on total rushing yards, with Mazyck at 434 total yards, averaging 5.71 yards per game on 76 carries, while Davis and Wooley have 414 and 389 total yards, respectively. Wooley is likewise tied for most rushing touchdowns at 6 with Vidor senior Brad Nunez. Davis has the highest rushing average at 9.2 per carry.

“He probably has all those carries because he’s a good quarterback and runs the ball well,” Nederland head coach Monte Barrow said. “Our defense’s mindset going into the game is we have to stop the quarterback and the running back. That’s our m.o. defensively, we’ve got to have 11 guys on the ball, so we’ll know where he is, whether it’s lined up in the back field or spread out.”

The Bulldogs’ rushing game will face stiff resistance from Baytown Lee, who has given up a total of 854 yards so far, the second fewest in the district after Vidor, who has played five games going into tonight. The Ganders will need to step up their passing defense, as they’ve given up 827 yards, the second most allowed in the district after Dayton.

This could give Nederland’s receivers openings to make plays. Mazyck has 14 catches for 238 yards, while sophomore Kyndon Fuselier has the second most yards at 457, only 12 yards behind the top total and 189 yards ahead of the third most.

Nederland senior Bryce McMorris, featured Tuesday as The News’ player of the week for his 87-yard pass to Bryson Garrett against Dayton, has the district’s most yards passing with 1,177, the second most attempts at 131, second most completions at 72 and 10 touchdown passes to his name. He also has 5 interceptions in a three-way tie for the district’s most.

“We’re talking to our receivers as well as our quarterback to make sure first when we’re running routes we’re coming back to the ball, because they’re definitely coming to the ball, and second to not keep the ball in the air too long,” Barrow said. “That’s on the quarterback and he knows with the ball in the air they have a chance of getting to it faster with their speed on the back end.”