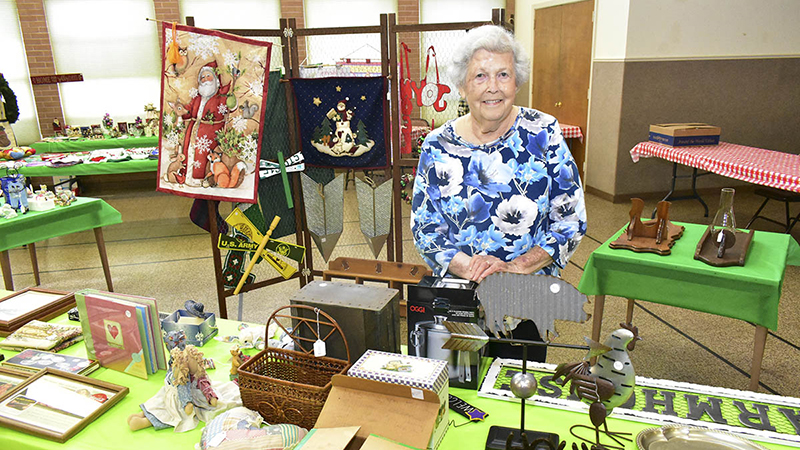 Their annual Fall Bazaar is the organization’s biggest fundraiser of the year. McCall, who serves as the church’s UMW treasurer, has taken part in the event since its beginning.

“We started in the early ’60s, mainly doing craft work, jellies and figs and things like that,” the soon-to-be 90-year-old said. “You can see how it’s grown.”

Arts and crafts, as well as baked goods, jams and jellies, mystery books, hand-knitted clothing for babies, Halloween- and Christmas-themed items and plants are among items for sale at the Bazaar, which is set for 9 a.m.-2 p.m. Saturday at the church, 1826 Nall St. in Port Neches. An auction will be held as well.

The people who visit are what make the Bazaar a successful event each year, according to church member Pat Briggs.

“The fellowship and seeing the community and the people and welcoming people in our church, … I think that’s what we enjoy seeing,” she said. “It’s a big event for the United Methodist Women, and it’s a wonderful tradition in Port Neches. We all enjoy working on it.”

For her part, McCall is baking seven buttermilk pound cakes, four fig cakes, one persimmon cake and a number of pecan pies.

McCall was First United Methodist Church’s UMW delegate from 1981-2017. She was married for six decades to Morris McCall, a district delegate who was Port Neches municipal judge for 41 years until his 2016 retirement. Mr. McCall died in 2017.

For an early birthday present, she was recently awarded the Hazel Decker Award from the UMW Texas Conference near Palestine for her longtime service.

“They surprised me,” McCall said. “[Decker] was a longtime member. I was honored by that.”

The United Methodist Women’s stated purpose is “to know God and to experience freedom as whole persons through Jesus Christ; to develop a creative, supportive fellowship; and to expand concepts of mission through participation in the global ministries of the church.”

Money raised from the Bazaar assist the UMW in helping to improve the well-being of others, like supporting schools, offering care packages and supporting initiatives with a focus on women and youths. Church-supported missions domestic and abroad also benefit from the Bazaar.

Fellow member Jan Alexander said some of the same visitors come back each year.

“We have a variety of people,” she said. “They do it because they know they get good deals here. You might go to another store and buy a plant for much more, but some of these plants go for just $5.”

Some like 95-year-old Dudley Boudreaux, come every year to provide plants such as bromeliads, church members say.

“Everyone contributes,” Alexander said. “You never know who will show up with what. You know some people will bring the same thing every year, and we need it.”

For further information on the Fall Bazaar, call the church at 722-8357.