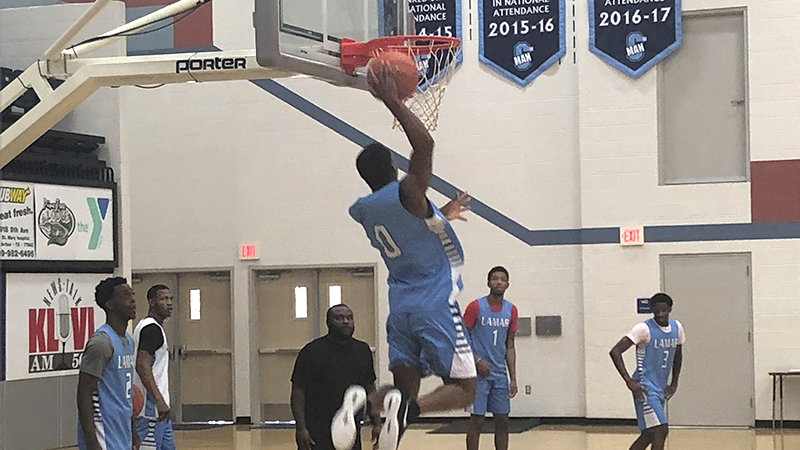 Freshmen come every year, but this season, the Lamar State College Port Arthur Seahawks basketball team is a little older, a little wiser and a good deal more experienced, with 11 sophomores bringing what they learned back to the court at the Carl Parker Center.

“We have an older team this year, which is hard in junior college because we get new players in every year, and last year we were majority freshmen,” assistant head coach Casey Apetrei said. “It helps so much because they know what they’re doing, and you don’t have to answer as many questions as you sometimes have to with newer guys.”

“Older players understand the culture, they can teach some of the younger guys, and that’s less teaching for us,” he said. “That means more quality teaching as well. The less we teach, the more our quality goes up.”

Less to teach means moving quicker to practice, and means the returning players already have a strong bond built among them.

“We’ve got a lot of new guys coming in this year, some freshmen, but we also have a lot of returners with a lot of chemistry so it should be a great year,” sophomore forward Devaughn Thomas said. “I think the team’s coming together well. We bond on and off the court, and the chemistry is there for sure.

“For me, for my team, I think we’re going to be good this year.”

Thomas, whom Madison said was perhaps the team’s “most recruitable player” this year, brings his diversity back for the Seahawks.

“I can play inside and out, I can handle multiple positions, guard, rebound, assist, I just try to do everything I can to help my team win,” he said.

“We’re a little disappointed in that, but that’s just extra motivation, because we had most of our team come back from last year,” Apetrei said. “We are good, but we kind of thought we’d be first or second.

“I feel like that’s an underachievement to us, and a disrespect to us also,” sophomore guard and former Memorial player Darion Chatman said. “We’re going to work hard and show them up.

Nederland’s Darrell Jones, who transferred back from John Brown University and redshirted for the Seahawks last season, has also played well in the preseason.

The Seahawks will host their Blue and White scrimmage at 6 p.m. Thursday, Oct. 24, at the Carl Parker Center. Their season opener will be at home against Uptempo Basketball at 7 p.m. Nov. 1.