No ‘I’ in Jeremy: Holland named Port Arthur Firefighter of the Year 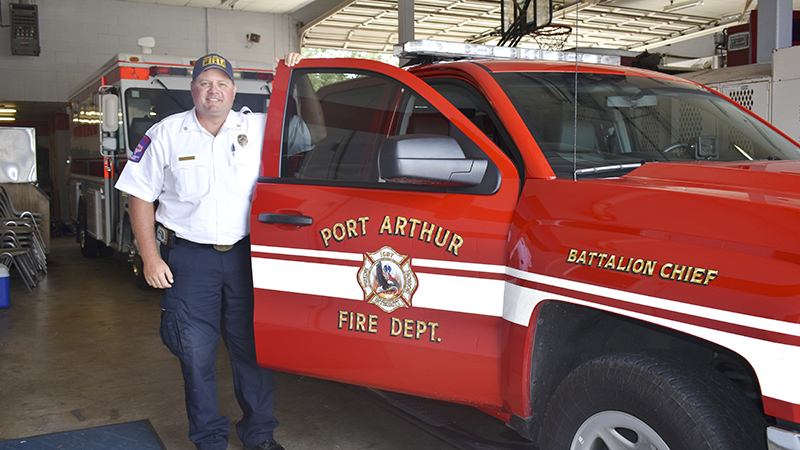 When Jeremy Holland talks of major points in his career, he speaks as a team using “we” as opposed to “I.”

Hurricane Rita, which struck in 2005, was a learning experience for first responders as well as regular townsfolk and he remembers vividly how they stayed up almost 24 hours while loading fragile nursing home residents and hospital patients, some of which were on life support, into a waiting C130 military plane.

“We started loading, went all day, into the night and to the next morning – it was almost 24 hours,” Holland, a battalion chief, said. “We had never experienced anything like that before.”

Rita was a learning experience for many and by the time Hurricane Ike hit in 2008, many were prepared. Tasks such as dealing with governmental red tape and the Federal Emergency Management Agency right down to making sure there were enough generators available to run necessary equipment was old hand.

Battalion Chief Holland was recently named Firefighter of the Year, an award he doesn’t take lightly.

“It means a lot to me because the guys voted on this,” Holland said from his office inside PAFD Station No. 1 on Woodworth Boulevard. “This is definitely a tremendous honor. I don’t take it lightly.”

A 22-year veteran firefighter, he spent one year with fire department at the Jack Brooks Regional Airport before hiring on with PAFD.

But when asked why he became a firefighter, the answer was elusive.

“I don’t quite know what it was. I guess it’s something that has always been with me as a kid,” he said. “I do what I love.”

PAFD Chief Larry Richard said Holland worked his way up through the ranks and is well respected by the men on the shift and throughout the department.

“And he’s also one a few in the state who are certified in aircraft rescue firefighting, structural firefighting and also marine firefighting. Overall, he’s just a good guy,” Richard said.

A speech introducing Holland as Firefighter of the Year was read during the recent ceremony that said over his tenure with the fire department, he has, on many occasions, embraced the challenges of accepting increased levels of responsibility without hesitation.

During Hurricane Harvey in 2017, the fire department was on a bit of an island in that its elevation is higher than the roadway. Floodwater came up to the edge of the bays, and that’s where firefighters launched boats and waded out from to rescue their neighbors.

The rescued were brought back to the station’s training room, where there were MRE’s for them to eat. Later the evacuees were brought to shelters that popped up in the city such as the Carl Parker Multipurpose Building.

“The people we brought here were so kind and understanding,” he said.

While first responders are focused on life saving, they must put their own worries and thoughts of family aside for the betterment of the community.

“The situation is unnerving but this is our job,” he said. “We’re here, our families are evacuated and we have no way of knowing about our house. It was a little over two weeks before I could check on my house after Rita. Fortunately, it was OK, just a few shingles missing.”

Working in the public

Holland and other firefighters get recognized for the work they do.

“It’s not just me. When you have something bad happen in your life, people recognize faces. ‘You were at my house when my dad…’ or if they were in a bad wreck,” he said.

Holland appreciates when he’s at a restaurant and someone picks up the tab. Moments of recognition are very special, he says.

Holland refrains from taking credit for different aspects of his job.

“I work with a special group of guys. I’m nothing. I don’t think I deserve it truthfully,” he said. “They are the real deal, the best in the biz. The city of Port Arthur has some true professionals who work here.”