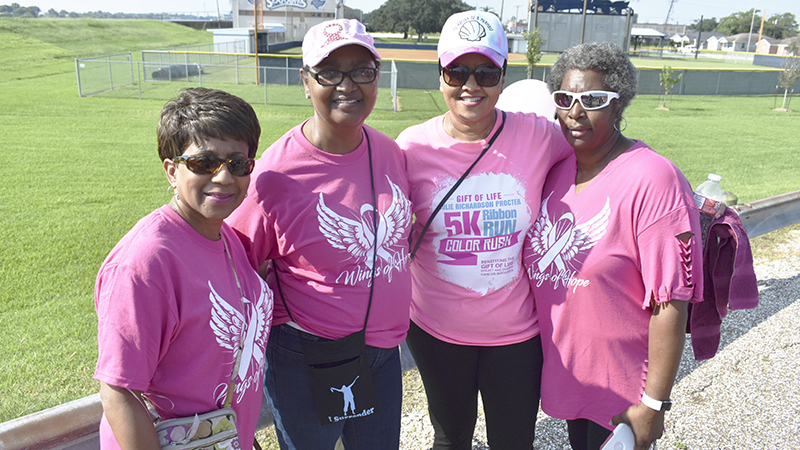 Debora Phillips had been diagnosed with cancer twice — cancer of the breast and lung — when her husband, the Rev. Frank Phillips Jr., died of colon cancer in January 2014.

“It was difficult for me to understand how I survived two [cancer fights], but yet he didn’t,” she said. “It is times like these, Breast Cancer Awareness Month, that I realized God wants to use me to encourage others that He is still a mighty healer over cancer and anything and everything else that comes upon us, His children. He is in control.”

Born and raised in Port Arthur, Phillips has been a breast cancer survivor for seven years. She was diagnosed in 2011 with Stage 2 triple-negative breast cancer.

The diagnosis stumped Phillips’ doctors, she said, because she had a mammogram done several months earlier and the result was negative.

“Doctors didn’t think that I had it, but it was determined that I had five tumors,” Phillips said. “I went through chemo for six months, and four of them dissolved. The fifth was removed by surgery. God blessed me.”

She went into the emergency room, where an x-ray revealed signs of lung cancer. Surgery to remove it was done within two months.

“Again, God blessed me,” she said.

A retired administrative secretary in the Port Arthur Independent School District, Phillips participated in the Wings of Hope Breast Cancer Walk on the Port Arthur Seawall on Oct. 5 and met other breast cancer survivors, including Oradell Thomas. Diagnosed in late 2008, Thomas’ cancer has been in remission for 10 years.

Thomas’ discovery of the disease was a bit similar to Phillips’.

“I had a mammogram in May 2008, and it came out normal,” Thomas said. “I did a self-examination in November, and I found a tumor. I went through chemotherapy to remove it.”

These days, Phillips speaks at women’s conferences and serves as a women’s ministry teacher at Greater True Vine Church in Port Arthur, sharing her testimony and the good news from a higher power. She says she receives a good report every time she undergoes a mammogram.

“Don’t fear going and having an exam,” she said. “I’m saying to all the women, once a year, go have it checked. It’s worth it. God has not given us a spirit of fear. We have to do it.”

Editor’s note: In honor of Breast Cancer Awareness Month, this is the second in a series of features The News is publishing on Thursdays during October about people in our area who have survived breast cancer.