Back to consistency: PNG making sure to correct mistakes ahead of Dayton 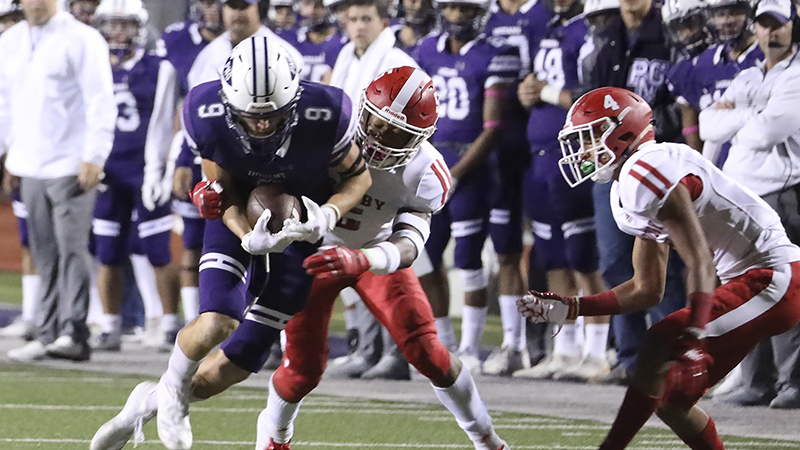 Kaleb Wuenschel of PNG hauls in a pass against Crosby on Friday in Port Neches. (Leo Weeks Photographers) 10-11-19

The Crosby Cougars took the ball away four times in last week’s game against Port Neches-Groves, three of them through interceptions.

As Indians head coach Brandon Faircloth described it, “We were shooting ourselves in the foot.”

“Crosby’s a great team so when you make mistakes, they’re going to make you pay for them,” he said. “When you drop passes or miss blocks, it’s going to go in their favor. They had a great game plan and we had trouble executing, and when that happens, it can be a long night.”

Dayton’s sole win of the season came against Galena Park on Sept. 9. The Broncos charged out of Galena Park with a 51-7 win against the Yellow Jackets, who themselves only have two wins this season.

Since then, Dayton’s suffered a four-game losing streak. Dayton also lost against Crosby, but whereas the Indians kept the Cougars to only 13 points, Dayton was shut out by Crosby 44-0, a testament to how well the Indians’ defense handled the Cougars’ offense, which averages 18.8 points a game.

“We held Vidor to 10, we held Tomball to 9, we’ve been pretty consistent on defense. Faircloth said. “I’m really proud of coach (Dustin) Templin and all of our defensive staff. The defense guys have been playing really well.”

As well as the defense has been playing, the offense is working on learning from their mistakes against Crosby. Faircloth says the Indians have been focusing on their plays in the red zone and ball security to avoid further turnovers.

“Every week you find new ways to improve,” he said. “When you play a good team like Crosby, they’re going to show them to you.”

Senior running back Kaleb Wuenschel is feeling better about how the offense has been playing over practices this week.

“Our team’s built more chemistry since our last game,” he said. “We’ve got a good feeling about Dayton. We’re going to get some revenge.”

Wuenschel says the offense is focusing on the passing game to help get the scoring back up.

“We’ve got to put more points on the board — seven points isn’t like us, for sure,” he said.

Before the game, PNG will honor the 20-year anniversary of the 1999 Indians’ playoff run that landed them in the 4A Division II state championship game against Stephenville. The 1999 team’s coaches and players will be announced, and former head coach Matt Burnett will he named honorary team captain for the coin toss.

At 7:15, PNG will show on its videoboard a clip of “The Drive,” the scoring drive by the Indians in the 1999 semifinal game against Schertz Clemens that won them the spot in the state championship game.