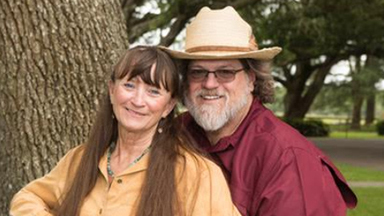 His whole family does, she believes.

“When he hears of someone in need, he’s the first to respond and get his crew together to cook,” said Colletti, the 2018-19 president of the Port Arthur-based Aurora Golden Triangle Sertoma Club.

A foggy Thanksgiving Day in 2012 led to a chain reaction of at least 100 vehicles, according to news reports, wrecked on Interstate 10 between Winnie and Anahuac. An elderly couple was killed.

“My son in law, who responded to the accident, called us and told us how many people were just walking around in the fog,” said Courville, who operates Courville’s Catering and Special Events in Beaumont.

“My brothers and I come in the kitchen every Thanksgiving morning to put on food, and we started getting reports of a big pile-up on I-10 to the point they shut down the road. We put more food in the stove. We have a commercial kitchen. We put on more chickens and turkeys and my daughter and I took the food out to the scene.”

Acts like these are why the local Sertoma Club selected Courville and his wife Chelle as the winner of the Service to Mankind Award, the club’s highest honor for a non-member, for 2019.

The name Sertoma is short for “service to mankind,” and the organization’s mission is “to improve the quality of life today for those at risk or impacted by hearing loss through education and support.”

Jodie Wood of the Sertoma Club remembers Courville asking to serve as auctioneer of last year’s banquet, which honored longtime law enforcement officer Marcelo Molfino. One of the items up for bid was a dinner for 50.

“For those who bid, I’ll do four dinners,” Wood recalled Courville saying. “He’s just got a big heart.”

The Courvilles will be honored with a banquet in their honor at 6 p.m. Oct. 28 at Benton’s, 330 Twin City Highway in Port Neches. A social will begin at 6 p.m., followed by the dinner and presentation at 7 p.m.

“It’s an extreme honor, especially if you look at the people they’ve honored in the past,” said Courville, who will turn 60 in December.

“I never knew that much about Sertoma in the past. I attended an event last year, and I learned what the Sertoma Club does in our community as well as nationally. I’m very blessed and honored to be a part of the organization.”

The Courvilles, Rich said, have a knack for feeding large groups for special events or emergencies, such as hurricanes and fires.

“We always try to take care of our first responders and the military and those who are just without,” Rich Courville said. “I don’t think there’s a reason for someone to go hungry.”

Courville worked in the chemical plant business straight out of high school and developed a love for cooking at a young age.

“In the summers I stayed on a working farm and I grew up around people who were always giving back,” he said. “I was in Boy Scouts. I learned how to cook and plan meals. Once I went to work in the chemical plant, the guys would cover the plant while I cooked for everybody.”

Courville worked as a chemical process operator for Mobil and traveled across the globe before deciding he wanted to be closer to family. Hence, Courville’s Catering and Special Events was established in May 1999.

“I told my family, I’ve had enough going in and out of this [airplane] gate,” Courville said. “My favorite thing is going home in the evenings and it still is.”

Chelle Courville recently retired from Vin’s Paint and Body as a parts locator.

“Chelle is the blessing in our operation” as a wife, mother and grandmother, Rich added.

The couple, who has been married 30 years, has two daughters, two sons-in-law and four grandchildren, with a fifth due in January.

One of the daughters does events booking and planning for Courville’s, and the other is the company accountant.

Tickets and sponsor tables for the Service to Mankind banquet may be ordered by contacting ] Jodie Wood at 718-7082 or emailing mazesgoya@gmail.com, or Colletti at 718-7712 or louisa4308@gmail.com. Proceeds will be used to pay for audio looping in the community.