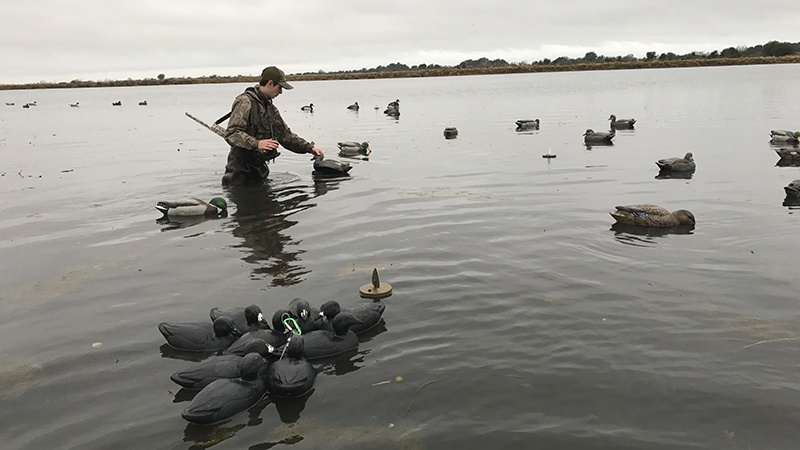 The water was waist deep after Hurricane Harvey, but we had some of the most memorable hunting. (Courtesy photo)

As an avid waterfowl hunter for over 35 years, I have had more great duck hunts than any one person deserves. I have been fortunate enough to share the duck blind with some amazing people in some amazing places.

My favorite however, took place a few years ago right down the street from my house. We had been dealing with an over abundance of water that begin with the immense flooding of Hurricane Harvey. After this disaster, the rain never really seemed to stop.

The high waters had the ducks spread all over. The season had been less than spectacular to say the least. Since it was the last day of season, I decided to give it one more final effort. When we turned in the road to the duck pond, it was covered in water. This would usually be a good time to turn around but since it was the last day, we trudged ahead with caution. Once at the pond, we found deep water. In fact, we hunted in a clump of marsh grass with the water waist deep and the legs on the Avery dog blind fully extended.

To make a long story short, I will say that it was worth the effort. Unlike most hunters, one of my favorite ducks to shoot are ring necked ducks. Most of the locals call them trash duck, but I am in love with the way they fly into the decoys like fighter pilots. I love the sound of the wind rustling through their wings, and I find them to be challenging targets.
For thirty solid minutes they dive bombed our spread and we shot like professional marksmen. Ducks were floating everywhere and Penny, my chocolate lab, made every single retrieve flawlessly. Not only did I have a ball hunting, I got to spend some great blind time with my youngest son that morning as well. The Jan. 28, 2017, Diver Smackdown is a hunt that, at least in my mind, will live in infamy!