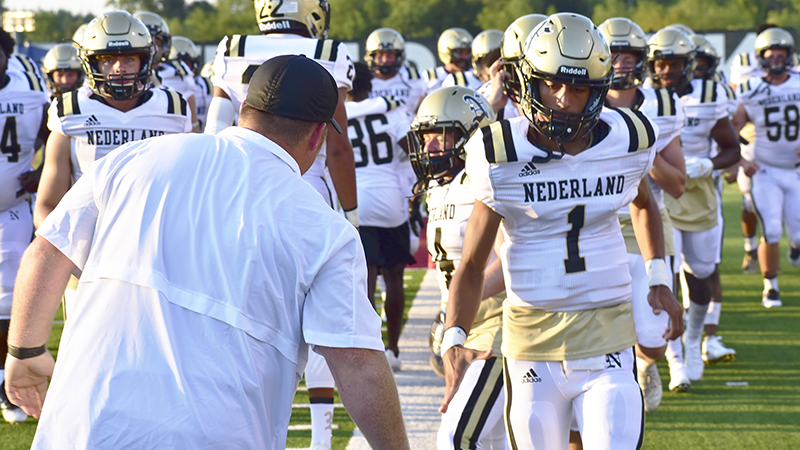 Bryce McMorris of Nederland completed 10 of 15 passes for 233 yards and two touchdowns against Dayton on Friday. (I.C. Murrell/The News)

Confidence is what keeps heads cool under pressure.

Nederland Bulldogs quarterback Bryce McMorris earned a good deal of it after his deep pass to senior wide receiver Bryson Garrett late in the fourth quarter completed the win against the Dayton Broncos on Friday, 29-17.

Such an 87-yard play came together from trust, in both himself and his receivers.

“I know all of these guys, they’re all my brothers, and we work hard every summer and every time we get the chance to practice,” McMorris said. “I just have confidence and trust in my receivers, and that they have the trust in me to get them the ball.”

For this, McMorris was named The News’ Player of the Week for Week 7.

Barrow says McMorris has learned to be better at home in the pocket, learning to trust his offensive line to keep him protected and learning to believe in the capabilities of his receivers.

“He was a little hesitant in the pocket at first, and rightfully so, he had a lot of pressure early on, which had to do with some of the teams we’d been playing,” Barrow said. “But he’s gotten more comfortable in the pocket and more trustworthy of his offensive line, who have done a better job as well, so it works together from the protection to the routes of the throw to the catch, all that’s started clicking as a team, and when it does you feel more confident in what you’re doing as a quarterback.”

McMorris went 10 for 15 for 233 yards and two touchdowns passing against Dayton on Friday. He rushed for another TD.

“I know my role, I just try to play my part and do a good job, staying back in the pocket, trying not to rush anything and being more careful with the ball,” McMorris said.

Nederland heads out of town Friday to take on Baytown Lee. The Ganders are coming back from a shutout against Barbers Hill, a 28-0 loss that puts Baytown Lee at 1-2 in District 12-5A-II and 4-2 overall.

Barrow says the Bulldogs will be looking to defend against the Ganders’ full spread offense.

“They’re very explosive offensively. They’ve got athletes all over the field. We’re getting our defense adjusted to trying to match what we can,” he said.

McMorris is keeping his mind on his performance though.

“I know it’s a big game, a district determining game, but I just go in confident to do my thing, and try not to worry too much,” he said. “I’m ready to play, I’m trying to compete with my brothers and get a win.”