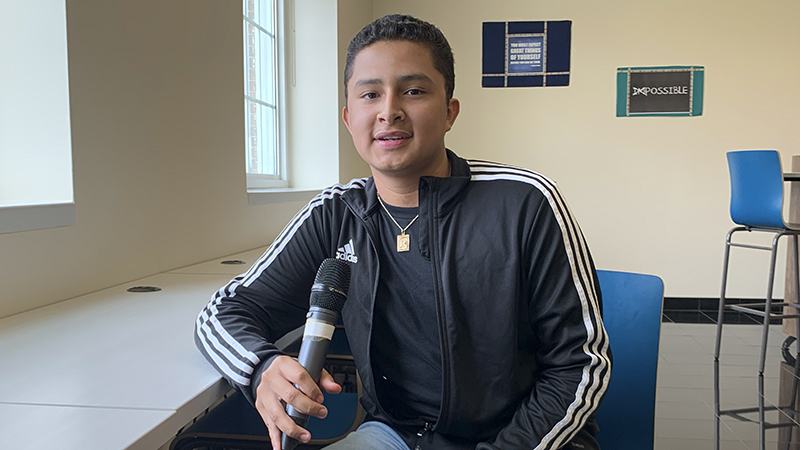 Robert Turcios Jr. is a junior at Woodrow Wilson Early College High School. The Port Arthur native has hopes to be a public relations officer, start his own clothing store and begin a non-profit organization for people struggling with communications. (Cassandra Jenkins/The News)

Roger Turcios Jr. is in his third year at Woodrow Wilson Early College High School, and his ambitions are high.

The Port Arthur native started his educational journey at Wilson as a freshman and has seen his futures and goals with a clear eye ever since.

“I felt that early college would be a great opportunity for me,” he said. “Not only to expose me to the many things that would take me until after senior year to learn, but it also gives me an advancement on what I need to learn now to be successful as I get into what I want to do for my career.”

Turcios, 16, is working on obtaining his associate’s degree in general studies at Lamar State College – Port Arthur before aiming to be a public relations director with a communications degree from Lamar University.

“You can’t go a day without communicating,” Turcios said. “You’re always constantly communicating whether it’s by phone or person to person. I feel like I communicate with a lot of people already, such as friends and faculty.”

Finding his passion for talking and leading at Abraham Lincoln Middle School, Turcios gave his first speech to a room full of teenagers.

It was his first time touching a microphone.

“I was kind of nervous until I said my first words,” he said. “Everybody was listening, and I felt like I grabbed everybody’s attention. I thought I could continue to do this.”

Going above receiving a degree, Turcios hopes to use his career for the greater good by starting a non-profit organization in communications.

“I want to help others who can’t speak for themselves,” he said. “I think I can help those people express their words and what they want to say for them.”

Aside from a passion for communication, Turcios said he is into fashion and hopes to own his own clothing store called “Port Vogue.”

“You don’t ever really see a store that has exactly what you want,” he said. “Maybe you see one thing you like about a shirt and something else on another. Vogue will combine both together to make it the ultimate design, and I want all sizes to be equal, nothing more expensive than the other.”

Turcios is also a liaison for the National Honor Society, a member of the Superintendent Advisory Council for Port Arthur Independent School District and an office aide for Our Lady of Guadalupe Catholic Church.