Do you want to learn about your family history? Port Arthur Public Library can help 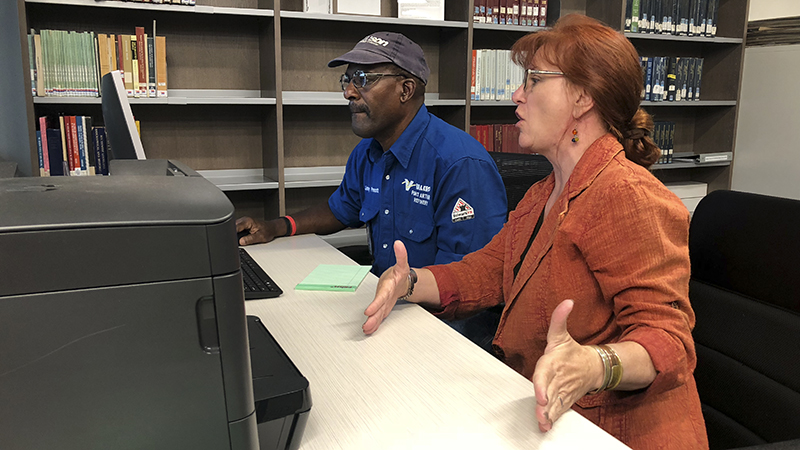 If not, the Port Arthur Public Library might be able to help you fill in the gaps on your family tree and learn more about your family history.

October is Family History Month, and the Port Arthur Library is helping trace roots as far back as the ample sources available can go.

Assistant Director Jenniffer Hudson Conners plans many of these genealogy events, hoping to share her own background in family history research. She’s already seen several regular patrons come in and take advantage of the resources and expertise of the librarians.

“We have a program called Book Librarian, where a patron can set up an appointment with a librarian to learn how to use some of these different resources, and that’s a one-on-one,” Conners said. “If you’d never heard about the Freedman Bureau and you want to look at some of those records, we can sit down with you and show you what kinds of records you might find in those documents.”

The Freedman Bureau, a bureau established after the end of slavery to help freed slaves transition with help to set up things like bank accounts, made records of whole families and documented relationships like marriages, especially if the couple had never been legally married.

“At that time there was no other way to collect that information about a family,” Conners said. “You might have someone open a bank account and they list their siblings and anybody else she can remember in her family, and sometimes it says whereabouts unknown because they may have been sold and the person didn’t know what happened to them.”

Such records, now digitized, serve as excellent sources to help find more names of family members that can lead to discoveries even higher up the family tree. 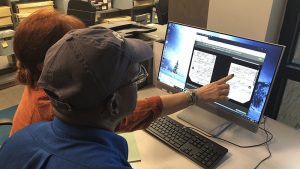 The library can help a researcher gain access to death records, marriage licenses, obituaries, church registries, newspaper archives and some city directories that can go back as far as the 1920s.

Port Arthur resident Jimmy Prescott only got started researching his genealogy about a week ago, but he’s already discovered so many family members he never knew he had.

“My family’s old, I have some uncles that were born in the 1800s, so we kind of go way back,” he said. “They were old by the time I came up to even understand anything. Finding out these things about them has really been exciting to me.”

Prescott learned about the library’s genealogy services from a fellow exerciser at the YMCA. He had been considering for a while giving one of the paid services advertised on TV a try but decided to stop by the library and see what he could find.

“I just started looking through the books, and that started pretty slow and tedious, and I went back and asked the lady if she could show me how to search on the computer,” he said.

“I’m still kind of scratching the surface. I’m really just trying to get a foundation of all the brothers and sisters. The tree has grown tremendously now to where I can’t even see it all, in that short of time I found so much stuff.”

Conners herself had been helping her grandmother and mother research their own family history back before computers. She would send in postcards to the courthouse asking for any records on a particular family member and wait months for the reply.

Now with computers it became easier to verify the stories her grandmother would tell. Conners was able to trace her family’s roots to Norway, where she took her mother to find the ancestral homestead and cemetery. Conners even discovered one of her ancestors marched in General George Washington’s army at Valley Forge, allowing her to gain membership to the Daughters of the American Revolution. 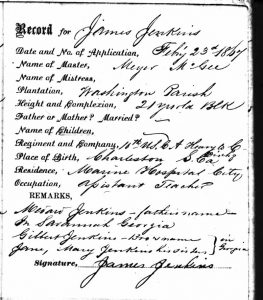 This image shows a document from the Freedman’s Bureau that records information for James Jenkins, who had applied for a bank account on Feb. 23, 1867, when he was 21 years old. (Courtesy photo)

“Some people don’t realize that there was American Revolutionary War activity taking place in Louisiana between Spain at the time, so if you have descendants who were in St. Martinsville/Opelousas area they may be connected to and qualify for membership in organizations like the Sons or Daughters of the American Revolution,” she said.

For those looking to start their own research, Conners suggests beginning with what researchers already know about their own family.

“Document what you know with the people currently living,” she said. “Start with yourself. Do you know your mother’s maiden name? Not everybody does. Ask her who her parents were, same thing with your dad, ask them where did they work, how did they come to Texas, or were you always here. Places and names are good and you can start working the timeline going back.”

When talking with family members, be sure to record them.

“I can tell you that 20 years from now, we come across those recordings of grandma’s voice talking about growing up, it’s pretty amazing,” she said. “I am fortunate that my grandmother gave her story before she passed away.”

On Saturday, the library is hosting a “Hands on History” class so patrons can take a look at their old documents and photographs and look for clues on what they could learn about the people in the documents.