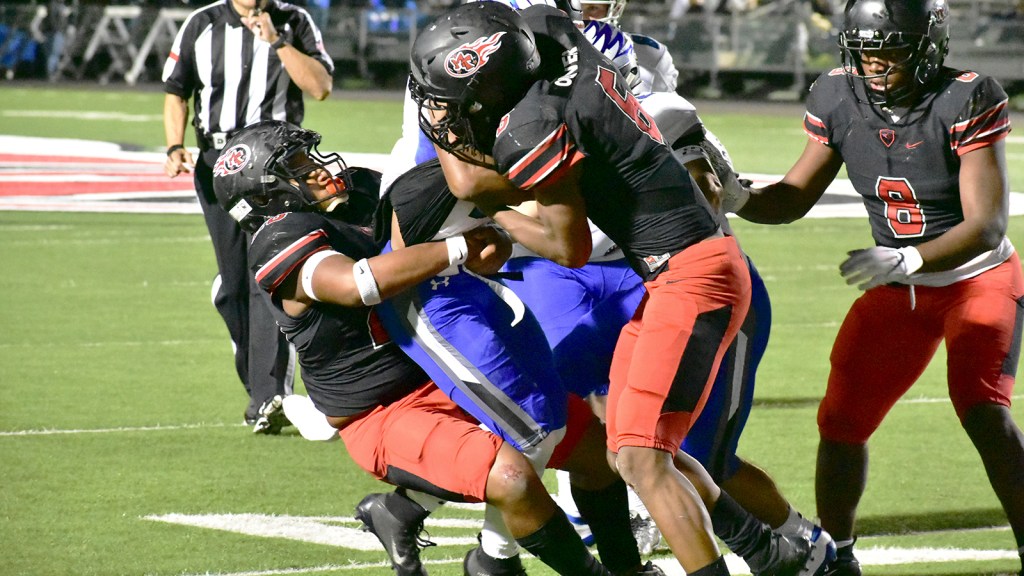 The drop in temperatures did nothing to cool the searing heat of the New Caney offense, as the Eagles soared over the Memorial Titans 42-12 Friday at Memorial Stadium.

The Eagles (6-0, 3-0 in 9-5A-I) racked up 28 points in the first half while the Titans (3-3, 2-1 in 9-5A-I) struggled to get on the board, only scoring their first points after a series of gains from junior running back Branden Chaney while behind center in the third quarter, leaving the Titans far behind when they picked up steam in the second half. 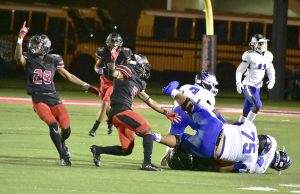 The Titans couldn’t catch a break, and when they did, New Caney came back quickly to steal their thunder. After senior wide receiver Alex Ned managed a 41-yard sprint to the end zone after a catch from sophomore quarterback Jah’mar Sanders, putting up points for second, and only other time the whole night, New Caney came back with senior wide receiver Kaylye Jackson catching for 51 yards for its fifth touchdown, just a kick and single snap later in the middle of the fourth quarter.

New Caney managed 490 yards gained on offense, 329 of those made in the first half, while Memorial was kept at 224 yards. Memorial, which seemed to gain a second wind after halftime, brought in 171 yards compared to New Caney’s 161 in the second half, but had only managed 53 yards in the first half and only 4 yards passing.

Flags kept the ball moving in the second half, costing both the Titans and Eagles yards. It took three tries for New Caney to make a successful punt early in the fourth quarter, after a false start and illegal formation pushed the Eagles back, only to return some yards when Memorial senior linebacker Trone Oliver was ejected from the game for a personal foul.

New Caney quarterback Zion Childress accounted for 123 yards of the Eagles’ total yards and making three of their touchdowns.

THE GAME CHANGED WHEN…

The Titans recovered New Caney’s second fumble of the night at their own 27-yard line. Having stopped the Eagles’ 31-yard drive before they could score again, Sanders threw an interception, also his second of the night, and also made shortly after the Titans recovered a fumble, caught by New Caney’s Jackson playing defense. The Titans only scored once more afterward, and neither touchdown was followed with an extra point.

THE GAME BALL GOES TO…

Junior running back Branden Chaney, who pulled the Titans out of their scorelessness with 40 yards made rushing on six quick snaps.

The Titans head to Porter High School to face the Spartans (4-1, 2-0 before Friday’s game against Goose Creek Memorial) at 7 p.m. next Friday.

The Eagles continue their road trip to play Kingwood Park (2-3, 1-1 before Friday’s game against Galena Park) next Saturday.