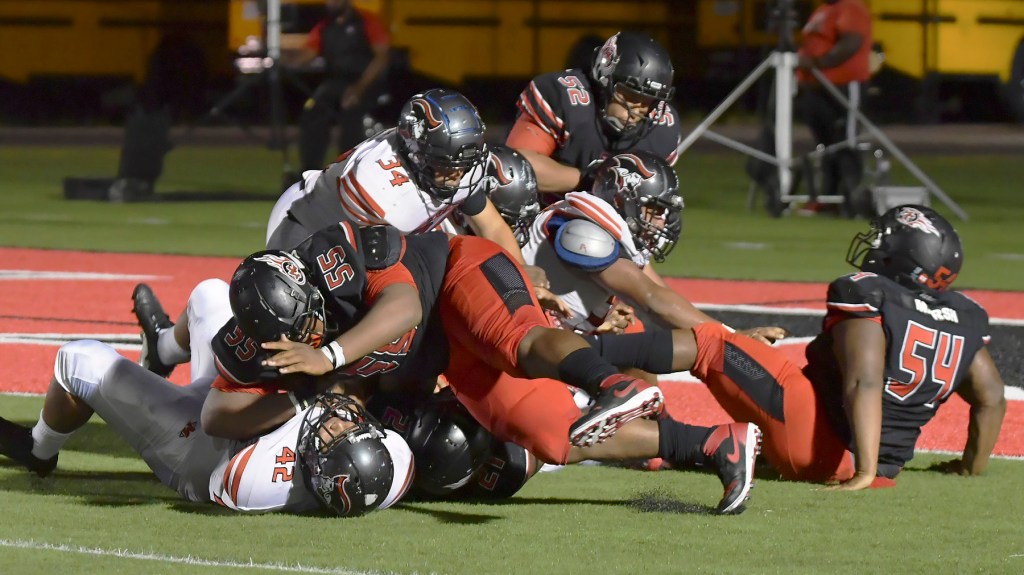 Four weeks of football will remain following tonight’s first-place contest between Memorial and New Caney, but it was this matchup a year ago that ultimately knocked Memorial down to the second seed in District 9-5A Division I.

“We understand what happened last year and why the outcome was what it was, and our guys are ready to make things right,” Titans coach Brian Morgan said, recalling his first defeat.

Fifteen penalties for 220 yards, 13 of them for personal fouls, proved costly in a 38-21 loss against the would-be district champions.

While that might be enough motivation for redemption, the Titans are keeping their cool for a big home game.

“I’m just trying to stay calm,” senior wideout/tight end Tavian Gipson said. “I don’t want to get caught up in the hype. I just want to play my game.”

Neither team made lengthy playoff runs in 2018. Memorial was upset by Richmond Foster in the bi-district round, and New Caney was edged by Georgetown in the area round.

Following a challenging non-district run, the Titans (3-2, 2-0 in 9-5A-II) are tied along with New Caney and Porter atop district standings and have allowed their youth to serve them well, thanks in large part to sophomore quarterback Jah’mar Sanders.

“I think the thing you’ve seen is constant progression, really, on both sides of the ball,” Morgan said. “Offensively, we expected to get better as the season goes on with our quarterback. I think you’ve seen that. We’ve been able to play faster and execute well, more than anything.”

Big plays from guys like Gipson, senior running back Kason Williams and Sanders have allowed the Titans to outscore Galena Park and Goose Creek Memorial by a combined 47-20 and average 302.2 yards per game. Sanders’ 622 yards rank fourth in 9-5A-I.

Senior quarterback Zion Childress, a UTSA commit, leads the district in two categories. Childress has thrown for 846 and nine touchdowns against four interceptions, and his 799 yards (nearly 160 yards per game) rushing tops second-place A’marion Kelly of Galena Park by 388.

Childress has run for nine scores, but he also has junior Cale Sanders (398 rushing yards, eight touchdowns), the district’s third-leading rusher, lining up behind him.

“I think Zion’s a really good football player,” Morgan said. “I’ve got a ton of respect for him. I think he’s played a lot of football for him, but I think our guys will be up for the challenge and ready to play.”

As highly charged as New Caney’s offense is (the Eagles have outscored opponents 243-71), Memorial’s defense is also stout despite its youth. With three returning starters on that side of the ball, the Titans still hold teams to 240.8 yards per game on average, almost 26 better than New Caney.

“Defensively, we lost a big senior class from last year, so we had to replace those guys and get playing time under our belt,” Morgan said. “That’s been key. Five games in, it’s starting to look like it should.”

And Memorial’s offense plans to capitalize in any way they can.

“Playing big games will prepare you for your district play and the postseason,” Gipson said. “I’m glad we had those tough games to get us ready for district play like we had last week.”