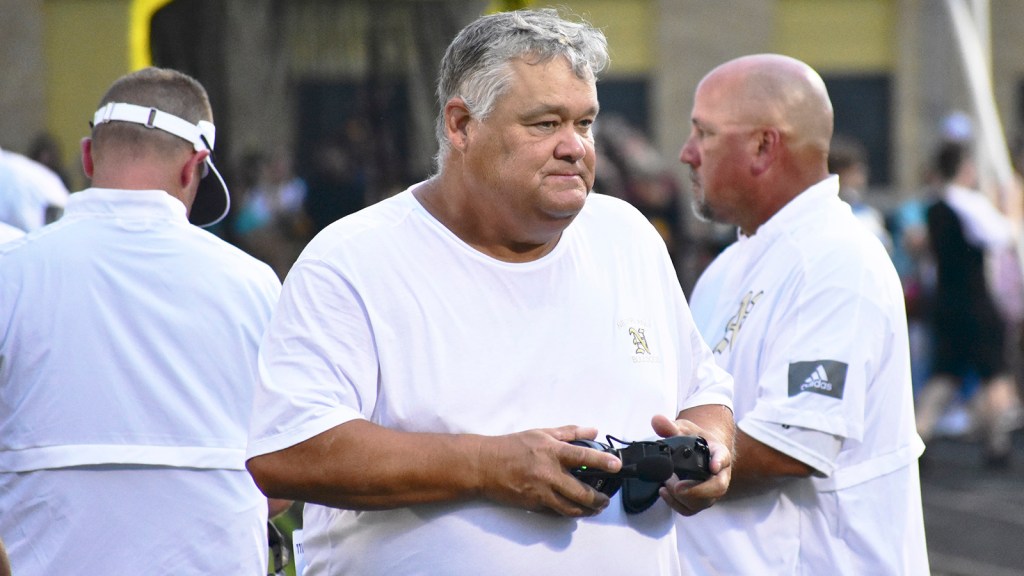 NEDERLAND — Had David Crommett not taken a bad fall from a ladder in the days following Hurricane Rita, the Nederland assistant coach might not have seen his offensive line from a different viewpoint.

“I was working after one of the hurricanes, cleaning up some lady’s yard,” Crommett said. “I was climbing the ladder, cutting limbs and I ran out of gas in the chainsaw. I was going to get down and I stepped down from the ladder wrong. I fell about 17 feet and broke my tibia, and they put steel plates and screws and all of that in.” 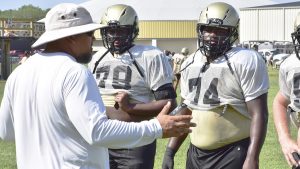 Crommett still coached the 2005 season, but never again standing near the offensive line.

“It was to get away from the action so I wouldn’t get run over, then it developed into having a better vantage point of alignment and everything by standing away from it,” he said. “That’s been, ever since, what I’ve done.”

Crommett recalled having the plates and screws removed July 20, 2006, eight days before the start of practice. By that time, Jae Stoker had joined the Bulldogs’ staff.

Since then, Stoker, Crommett and offensive coordinator-turned-head coach Monte Barrow have shared the same game plan.

Crommett positions himself far away behind the opposing defensive line to check out that unit’s alignment against his o-line.

“If I see something, I’ll go back over to one of the coaches or Bryan [Spell, wide receivers coach] and say, ‘Hey, this is what they’re doing. They’re in so-and-so, and there’s an opportunity to do this.’ It’s just a different viewpoint from standing beside them.”

Stoker coaches from the press box, taking in a bird’s-eye view of the action.

“During the game, it’s more about me seeing and talking to coach Barrow about what, really, the defense is doing,” Stoker said. “I’m trying to get more of a read on what they are doing on certain downs, if they are blitzing and situational stuff.

“I’m just getting a read on what their game plan is, where I can pick up on certain downs, how I can turn down what they’re doing, whether they like to blitz, being able to communicate that to him and telling coach Crommett, ‘Hey, we’re having this issue,’ since I do have a little better view of everything up in the box.”

Crommett has coached a number of positions in 33 seasons across multiple schools in Arkansas and Texas. During practice, while Stoker conducts most of the technical work with the o-line, Crommett works with the junior varsity huddle to help the defense.

“When we come together, he’s done most of the technique work and we get down to the group.”

Each game, it’s up to the front five of Jonathan Nguyen, Merritt Stiles, Logan Anderson, Jadon Windon and Michael Marshall to give Stoker and Crommett the results they look for.

“It’s like a relationship,” Stoker said. “Sometimes, they jell quickly, and sometimes, with three new starters, it takes longer. That’s our job, to try to get it sooner than later. Hopefully, it’ll come together.”