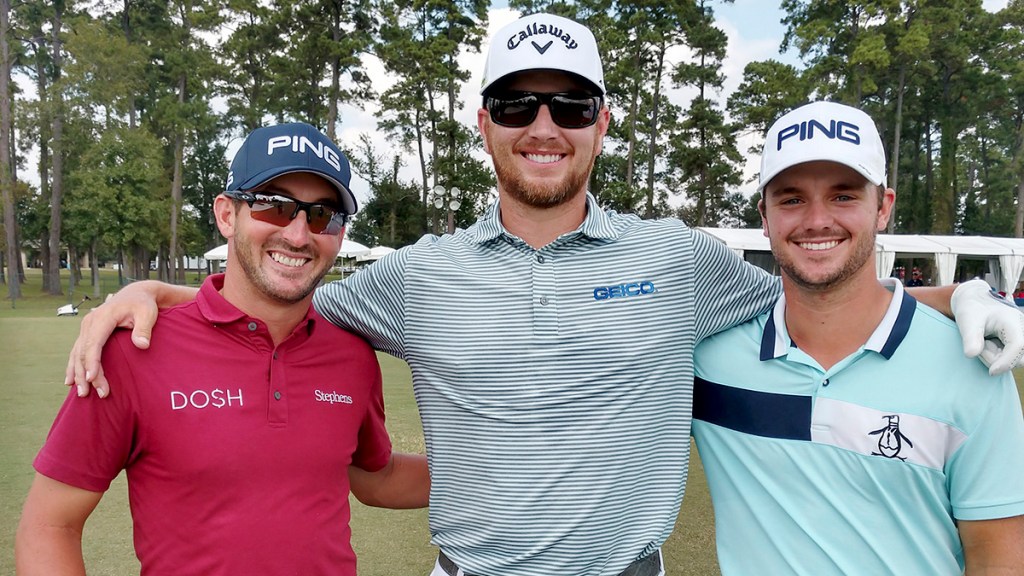 HUMBLE – Whatever nerves Braden Bailey was battling in his first PGA Tour start quickly disappeared when his seventh shot of the day rolled into the cup for an eagle two on his second hole. He’d knocked in an 8-iron from 174 yards.

In the blink of an eye, Bailey went from 1-over to 1-under and he spent the rest of Thursday making things look ridiculously easy in round one of the Houston Open. Bailey followed the eagle with back-to-back birdies, never had a par putt longer than 4 feet, added two birdies late and signed off on a 5-under-par 67.

With a handful of players in the afternoon wave still on the course at the Golf Club of Houston, the Port Neches-Groves ex was tied for seventh. He trailed co-leaders Austin Cook and Talor Gooch by three shots.

Things didn’t go nearly as well for fellow PNG alums Chris Stroud and Andrew Landry. Both were in danger of missing the cut after shooting 73 and 74, respectively.

“The eagle was huge in helping me get settled in,” Bailey said. “There was definitely a nervous factor with the bogey on the first hole. That second shot going in on 11 (he started on the back nine) relaxed me a ton. Then I followed it up with a nice birdie putt on 12 and it became a stress-free round.”

“It was the most fun I’ve ever had on a golf course in my life,” Bailey said. “I was so lucky to get this opportunity and I wanted to make the most of it. I wanted to enjoy the moment because it was a dream come true. But I never dreamed it would be as much fun as it turned out to be.”

Other than his opening hole, where a poor wedge led to bogey, the only times Bailey looked like he might not make par or better came when he was in greenside bunkers at 3 and 9. From 45 feet on 3 and 41 feet on 9, he got both shots within 3 feet.

“Overall, I played really well,” he said. “I was good but not great off the tee. My irons were great all day. I made a few putts. My caddie, Gary Matthews, was a big help, especially on the greens.”

Bailey also got the best of the weather. The wind got up to around 15 mph, but wasn’t a major factor for him until about his 13th hole. He may get the best of it Friday, too, with rain forecast in the morning, followed by clearing and cooler in the afternoon.

Bailey’s scheduled tee time Friday, off No. 1, is 1:45. p.m. If rain backs things up, he may not be able to complete round two until Saturday morning.

Stroud, meanwhile, looked to be battling his swing most of the day. He, too, started on the back nine and things were looking good when he rolled in a birdie from 5-10 on 11. But there were few highlights after that. He didn’t make another birdie until his 17th hole of the day.

Landry, battling tough afternoon wind, opened his round with seven straight pars, got to one under on 8, then made three bogeys on the back nine. Two of those came on the par 3s.