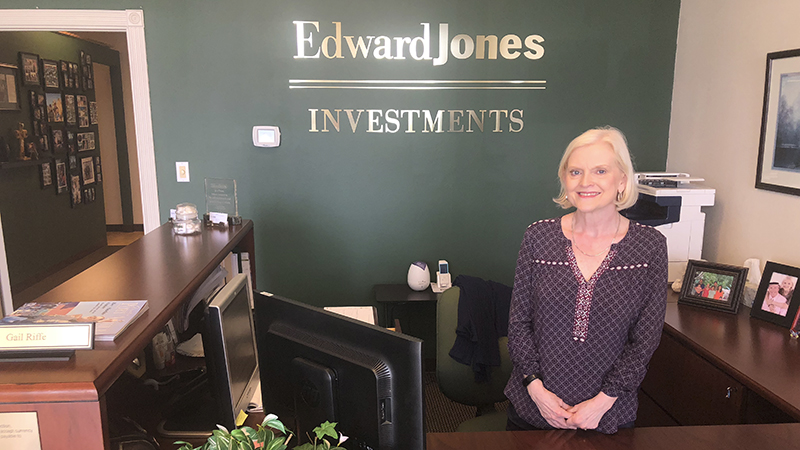 Gail Riffe of Kirk Ellender Edward Jones survived her breast cancer after a year of treatment during 2015 through 2016. (Brad Robichaux/The News)

Gail Riffe wasn’t sure if her concerns merited taking a trip to MD Anderson Cancer Center in Houston. She’d felt the lump one evening while ironing, and the next morning as soon as she slammed the snooze button on her alarm she felt the lump had grown practically to the size of a grape.

She did know it needed to be checked out by a doctor, so she went to her doctor in Beaumont, who performed a mammogram and offered to perform an ultrasound in a couple weeks, discussing these results with her in a couple more weeks on whether she should go see a specialist.

Riffe asked if there was anything they could do so she wouldn’t have to wait over a month to hear her results. Her doctor said she could give MD Anderson a call.

“It was like I was hit in the stomach when she said that,” Riffe said. “I was thinking ‘Do I really need this or do I wait?’ And she wondered if it’s really something they can get you in in a few days and do it all in one day.”

Riffe was unsure, but she made the decision to take a day to go.

It was a whirlwind of a day, full of mammograms, ultrasounds, and four different biopsies, just in case.

“I got there about 6:30 that morning to do blood work and I did not leave until 7 that night, but they told me when I left that I had breast cancer and that they’d get a plan together and call me in a couple of days,” Riffe said. “Within about a week and a half I had my first chemo. It was all done in one day, and afterward they told me I had it.”

Riffe took a year, after her diagnosis in August 2015, to fully recover from her bout with breast cancer. She underwent all three types of treatments: first chemotherapy to shrink the cancer, then surgery to fully remove it, then radiation to make sure every last trace of it was eradicated.

Four years later, Riffe is cancer-free, according to the results of her checkup last week at MD Anderson.

“I had all my tests redone and so far so good, no occurrences of it as of right now, but I’m still taking the dreaded medicine that is supposedly to keep it away that has pretty bad side effects to it,” she said. “They tell me ‘Deal with it. You need it worse than what the side effects are.’”

That’s the key, says Riffe: Do what they tell you, because the folks at MD Anderson know what they’re doing.

“They spend a great deal of time talking to you, and each nurse would tell you things when you’re going down there for treatment, just rest and take it one day at a time, just be around positive people, don’t drink, stay away from negative people,” she said. “Each person you went to had their own story and they’ll tell you little bits and pieces. They’re wonderful, they gave you good advice.”

For her chemo regiment, Riffe spent three months going up to Houston once a week for the first round. Afterwards her doctors added additional medicines, requiring her to make the trip every three weeks for an additional three months.

“They tell you it takes a week for the chemo to kill your system,” Riffe said. “Then it takes another week to bring your system back up to where it’s strong enough to get the chemo again, so it’s a three week process.”

The second round was the point chemotherapy began taking its toll on Riffe, but she never became too sick, and certainly not too sick to work.

“I felt bad and I felt nauseated a little bit, but I never missed a single day other than going to get the chemo, and I’m proud of that,” she said. “It was a long ordeal.”

Riffe, who works at Kirk Ellender Edward Jones in Nederland, had the support of her office, which helped cover her responsibilities during treatment, and even raised money to help with traveling expenses and to cover costs for an apartment in Houston she rented during radiation treatments.

“Edward Jones is very good,” Riffe said. “My boss Kirk told me ‘Do what you need to do, just let me know.’ We have a set of on-calls that work part time for all of our Edward Jones offices, so they’d come in at different times and would work for me and it worked out very well because they have the same system at any office you go to. It’s very easy for them to come in and fill in.”

Riffe never missed a single day of work for the whole six months of her chemo treatment. She says the medicines used along with the chemo drugs help keep patients healthy, calm and ward off the worst of the nausea, which helped bring her through the process.

She still lost her hair, though.

“They told me I would lose all of my hair in about three weeks, and I didn’t, it was a couple of weeks later,” she said. “It was thin, so I wore a hat a lot of the time, and I wore it in a pony tail so it wouldn’t keep coming out. About a week and a half later most of it fell out. I wound up cutting the rest of it out and shaving my head myself because my husband couldn’t do it! When you’re at that point and you lose most of it anyway, it looks better to be shaved than have a few little scraggly hairs here and there.”

MD Anderson, though, was once again there for to provide hats and wigs.

“I highly recommend MD Anderson, if they can save you, that’s the place to go,” she said. “I’ve met people from all over the world, some people who couldn’t even speak English. People that were old, young, black, white, every kind of person that there is down there. It’s the best of the best. We live too close to not go there.”

(Editor’s note: This is the first in a series of features The News is publishing on Thursdays during October about people in our area who have survived breast cancer, in honor of Breast Cancer Awareness Month.)