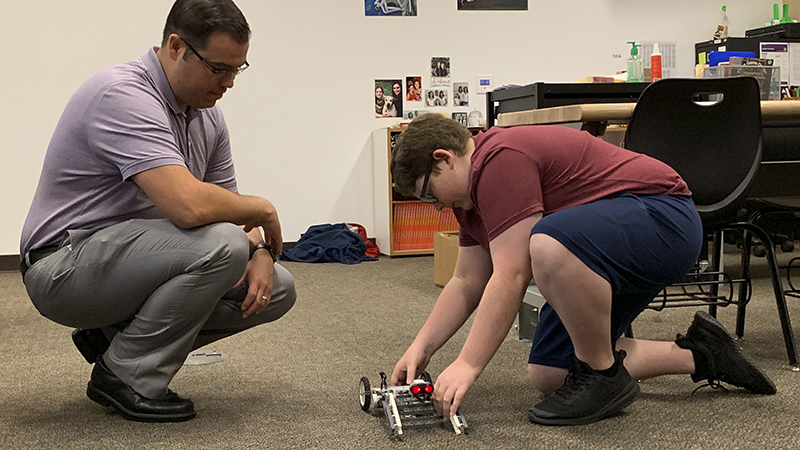 GROVES — Paul Bryan just finished his first month as Groves Middle School principal, coming full circle since he attended the campus as an eighth grader many years ago.

“It was really exciting coming back to Groves Middle School,” he said. “This is actually the fifth role I’ve played on this campus. I was a student here for part of my eighth grade year. I went off and got my bachelor’s degree in communications disorders and I was going to teach deaf education, but then I realized it was going to involve moving. I didn’t want to do that. I found that staying here was my thing.”

After receiving his bachelor’s from Lamar University, Bryan decided to stay in the Mid-County area by pursuing a teacher’s certificate in mathematics.

He taught at Silsbee Middle School for two years before returning to the Port Neches-Groves Independent School District.

“I was able to come back here and the room that I started teaching in was in our old campus,” he said. “It was the room that I took eighth grade math in. I still have the old room number on my shelf. I taught next door to my old language arts teacher. It was really cool to be able to go in and see them in a different light and work with them as a peer.” 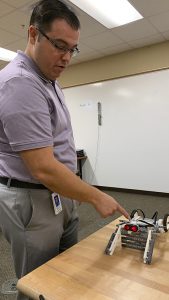 Bryan taught math at Groves Middle School for five years while working on his master’s degree in administration. Later, he also received his doctorate in education and school leadership, both from Lamar University.

“The last two years of me being at Groves, I was the technology specialist,” he said. “That was my third piece in all this.”

After leaving Groves as the technology specialist, Bryan went to Port Neches Middle School, where he served as the assistant principal.

“My son is now here at Groves as a sixth grader,” he said. “So that’s my fourth role as a parent and now I’m back in my fifth role as the principal. It’s really kind of cool to have gone full circle and come back and be here in this position.”

After former principal James Arnett announced his retirement at the beginning of August, Bryan stepped in to fill the shoes in mid-September.

“Being principal can be a whole lot of different things, but I’m a firm believer in the role that you play is your decision,” he said. “Being a principal can be anything. It could be the person who just sits in a place and does the logistical sides of things or it could be one of the greatest support systems that you can have. I see my job as one that is here to support the kids and the teachers so that everyone gets the most out of everyday.” 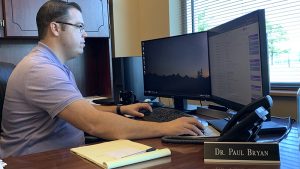 Bryan said he has received a lot of support from the campus during his first month and is excited to continue being a servant leader to his students and staff.

“I’m never going to ask somebody to do anything that I wouldn’t do myself,” he said. “I’m going to be the very first person to hold the door for somebody. I’m going to be the last person that gets in line to eat. My job is to care for others. That’s what education is about. I can’t do that if I’m being selfish.”

Outside of being a principal, parent and husband, Bryan said his hobbies include reading and geeking out over technology and programming.

“Right now, I’m having the time of my life,” he said. “This is just an extra piece to it.”