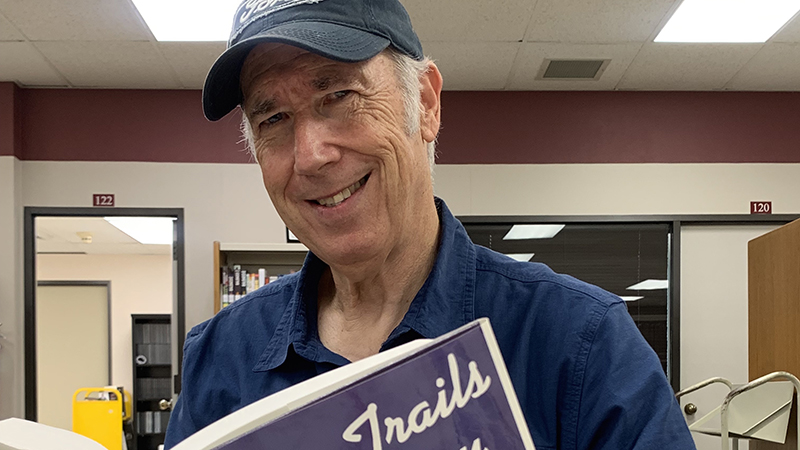 Jon Buck Ford is the author of “Down Trails of Victory: The Story of Port Neches-Groves High School Football.

On assignment yesterday I met Jon Buck Ford, author of “Down Trails of Victory: The Story of Port Neches-Groves High School Football. Ford is celebrating the 25th anniversary of his book being published by setting up a display at the Effie and Wilton Hebert Public Library in Port Neches.

The entire interview and experience was one-of-a-kind.

I have always been a major sports advocate. I’ve played basketball, flag football, ran track and cross-country. I watch Sunday night football religiously and attend local high school games when possible. So anything outside game-by-game reporting that has a human and feature aspect to it is an assignment I jump for even if it’s something I have no idea about.

I was not born and raised in Southeast Texas but I’ve spent the last eight years taking in the culture and meeting the people. One lesson that did not take me long to learn — high school football rules, and Jefferson County has traditions like no other.

So even though I’ve spent the last four years in the county living in Beaumont, I’ve heard of the supremacy and tradition of PNG football and tales of Mid-County Madness.

To be able to meet and hear the stories first hand from someone who spent a copious amount of time detailing its rise and development was fascinating.

We sat at the library for over an hour as Ford told me how he began making his book and showing me old photographs of players and coaches long since gone. He read me letters of fans, families and past players detailing their accounts and memories of being at Port Neches High School. The pride in his hometown and hard work was written all over his face.

He shared with me more than could possibly be written in a 700-word article, but that’s one of the hidden treasures of being a newspaper journalist — some memories are just your own.

As the time dwindled on, I knew I had to get back to work to write his article and begin other assignments, but before I went, we headed over to downtown Port Neches, where Ford brought me a personal copy of his book and signed it with a message and a big smile. In 1944, this would have been like the Holy Grail of high school football.

“When the book came out it touched commonality,” Ford said during our interview. “It cut across ages, genders and socio-economic backgrounds. It touched a common spirit. A common feeling reached across a diverse range of people. 1,200 books got sold out in 12 weeks and these people came in and cherished the content that was in that book.”

To me, someone who wasn’t even alive or thought of in 1994, the sentiment and memory is just as cherished and loved as it would have been then.

Cassandra Jenkins is a reporter for The Port Arthur News. She can be reached at cassie.jenkins@panews.com