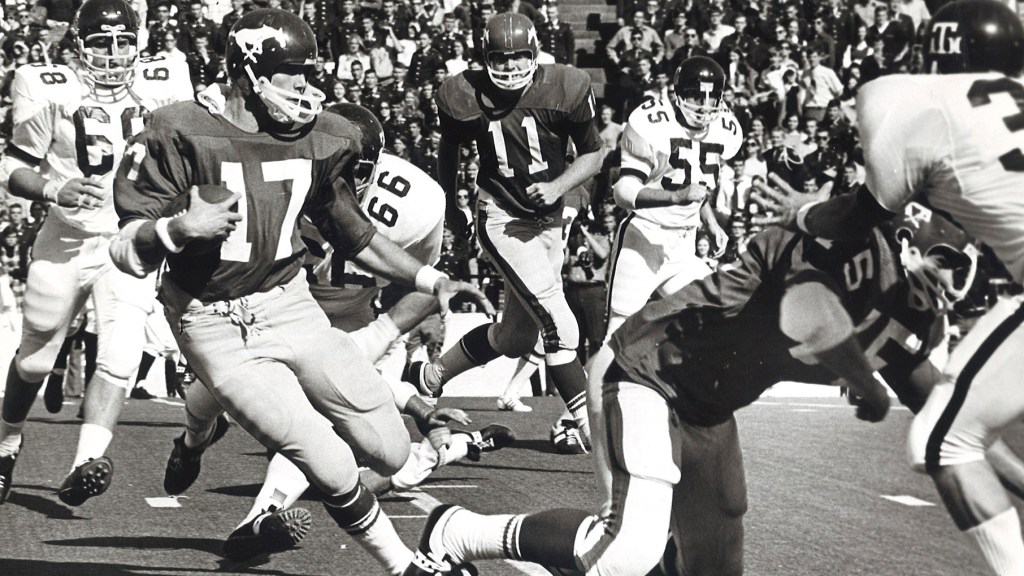 Gary Hammond of SMU, from Port Arthur, carries the football in this undated photo. Hammond played wide receiver, running back and quarterback for SMU from 1969-71. (Photo courtesy of SMU Athletics)

An online profile of Gary Hammond in 2009 reveals the Port Arthuran as the answer to the question: “Who replaced SMU greats Jerry LeVias and Chuck Hixson when their college careers were over?”

A better question would be: Who played three positions and led in a different category each year at SMU? 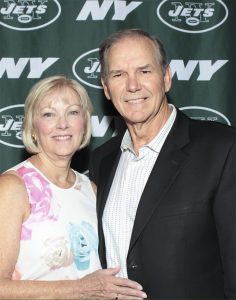 Gary Hammond and his wife Beverly in this undated photo. (Photo courtesy of Gary Hammond)

“I was going through spring drills as a quarterback before my sophomore year, and I had a pretty good spring,” Hammond said. “Coach Hayden Fry came to me, and he said, ‘I can’t have you standing on the sideline with me.’ He plotted me down at wide receiver.

“The next year, Hayden came to me and said, ‘Gary, I gotta get you the ball more.’ I said, ‘Just tell Chuck to throw it to me more.’ ‘Nope, I’m moving you to running back,’ he said.

“The next year, he walks up and says, ‘Now it’s your turn to play quarterback.’ Had I sat on the bench and watched Chuck the first two years, I don’t think I would have the opportunity to play on the professional level.”

Maybe unknowingly, the Mustangs found themselves a triple threat — receiver, running back and quarterback — who was ranked as one of the top high school quarterbacks at Thomas Jefferson High School.

Hammond is among nine inductees, one representing each university, selected for induction into the Southwest Conference Hall of Fame on Nov. 18 at TCU’s Brown-Lupton University Union in Fort Worth.

The SWC hall is one of four separate halls within the Texas Sports Hall of Fame’s physical structure in Waco.

“The class of 2019 is legendary,” Texas Sports Hall of Fame President Cooper Jones said. “It is legendary because of the character and accomplishments of these talented student-athletes.”

Hammond’s individual success didn’t translate into many wins. SMU went 12-20 during his tenure. 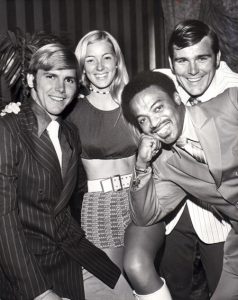 From left, Gary Hammond and his wife Beverly, Jerry LeVias and Sherwood Blount in an undated photo. Port Arthur’s Hammond, Beaumont’s LeVias and Blount starred at SMU between the mid-1960s and early 1970s. (Jack Beers/photo courtesy of Gary Hammond)

He also married the 1971 SMU homecoming queen, Beverly Kuck of Appleton, Wisconsin. Together they have three daughters and 10 grandchildren.

“It was a Walter Mitty tale,” Hammond said. “It was a lot of fun. I would trade a lot of awards for some more wins.”

The New York Jets drafted Hammond in the third round of the 1972 NFL draft, reportedly after then-coach Weeb Ewbank saw him earn the MVP award of the East-West Shrine Game, where Fry led his team. Hammond sustained a knee injury during the preseason, and the St. Louis (now Arizona) Cardinals claimed Hammond off waivers the next year.

Hammond retired from the NFL in 1976 and is a senior vice president for office leasing with Sabre Realty Management of Addison, near Dallas.

Among his congratulants for making into the SWC hall is LeVias, the first African American scholarship athlete who stood out at wide receiver at SMU in the late 1960s. The two exchanged texts Tuesday, Hammond said.

“Jerry LeVias is one of my favorite people in the world,” Hammond said. “Just a great young man.”