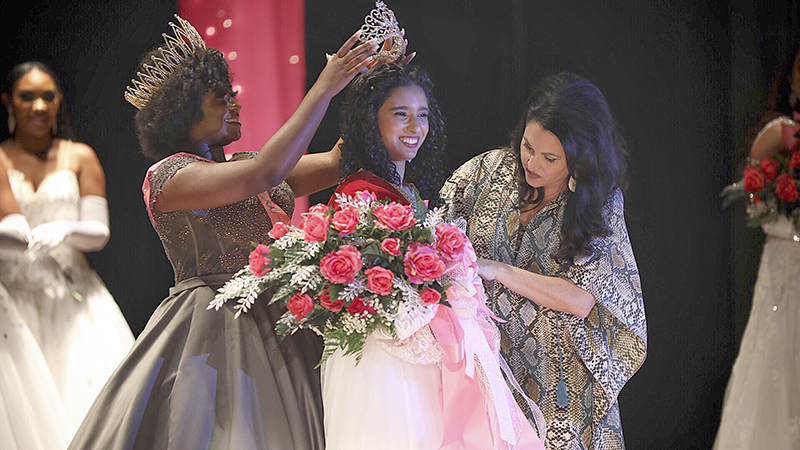 SABINE PASS — Maria Contreras was crowned the 2019 CavOILcade queen Saturday after participating in her first and only pageant, adding another item onto an already impressive list of accomplishments.

Contreras, who was born and raised in Cotija, Mexico, is also the youngest senior at Sabine Pass ISD at just 16 years old.

“In Mexico, we start kindergarten earlier,” Contreras said. “When I came (to Port Arthur) six years ago, they wanted to push me back a year because of my age. So I went to a Catholic school and they were OK with it as long as I kept up with the other people that were older than me. I’ve managed to keep up so far.”

Contreras, who lives in Port Arthur, chose to attend Sabine Pass ISD as a freshman year to continue challenging her mind, intelligence and education.

“I went to private Catholic schools all my life,” she said. “I guess I’m a little sheltered because of that, so my parents didn’t want to put me into another private school. I chose to go to Sabine Pass because it’s a smaller school and I thought I’d be more comfortable here.”

Since her freshman year, Contreras said she has been a part of the UIL academic team, dabbled in theatre arts, landed in the National Honor Society and worked her way up to be ranked third in her class.

“I do literary criticism and computer applications in UIL,” she said. “I’m also participating in the fall play, which I’ve done twice and I’ve done the competition of one act play once. It’s really fun hanging out with those people and doing new things.”

Contreras said she has always been a strong academic student and has her sights set on going to Stephen F. Austin to begin work on becoming an obstetrician.

She was doing a volunteer program at St. Elizabeth’s in Beaumont this summer when she was put in the labor and delivery department.

“I saw how the environment was and it was what I wanted,” she said. “They let me see some live births and it was really interesting. I think it’s very fulfilling to see the start of someone’s life.”

Contreras entered the CavOILcade beauty pageant for the scholarship money to help her begin paying for medical school. Contreras won a $1,500 scholarship for being crowned queen and an additional $500 for winning most photogenic.

“I’ve never done a beauty pageant or anything like that,” she said. “I’m kind of shy, but one of my teachers recommended it because medical school is expensive. I decided to do it and it wasn’t what I expected. It was way more relaxed and laid back than I thought it would be. The people were very friendly.”

Pam Trosclair, executive director of CavOILcade, said Contreras was chosen as queen because she stood out among the rest.

“Like all the princesses, she did fantastic but our queen is selected a little bit different from other pageants,” she said. “They are chosen through essay, stage presence and interview. She’s a beautiful young lady and she will represent the area well. The judges felt like her essay and interview were a little bit stronger. The point spread between the nine girls wasn’t that big, but she just had the edge.”

Contreras wants to spend the rest of her time before college racking up more scholarship money and hanging out with her parents.