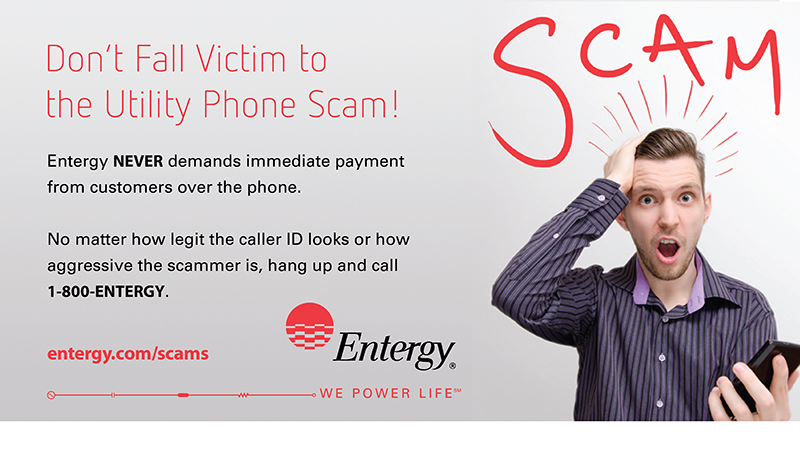 When the Rev. Blake Alling got a call last week saying Entergy was changing out the church’s electric meters and if he paid a deposit, they may be able to keep the utilities on over the weekend, he became suspicious.

“The most important message for customers to remember is that Entergy never demands immediate payment from customers over the phone,” said Andy Schonert, communications manager Entergy Texas.

Alling, pastor at Calvary Baptist Church in Port Acres, didn’t fall for the scam and is warning others about it.

The caller told Alling that Entergy was switching out their smart meters — something he knew had already been done.

Some of the cues to the scam came when the caller mentioned the Energy Commission and told him he could go into their office, located in Houston, to make the payment. He knew he couldn’t get there in time on a Friday afternoon and began questioning the scam artist. Then he was given the number of a supervisor and a case number.

“They said if you give us a deposit we night be able to put a hold on the disconnect,” Alling said, indicated he had failed to fill out a form, which doesn’t actually exist.

Alling said the odd part is that the scammer knew his phone number, address and the name of the previous pastor but those are bits of information that can be searched for.

He now worries about the elderly who may not realize Entergy would not demand money on the phone and doesn’t want anyone to be scammed.

After Alling got off the phone with the scammer, he immediately called Entergy and reported the issue, then he called the Port Arthur Police Department to alert them as well.

PAPD Chief Tim Duriso confirmed they received a call of an Entergy scam.

Entergy offers tips to help people recognize if someone is scamming them:

What should you do? Remember, Entergy NEVER demands immediate payment from customers over the phone. You shouldn’t give your personal information to strangers. If a call sounds suspicious, hang-up and call 1-800-ENTERGY (1-800-368-3749) to speak directly with an Entergy customer service representative. If you believe you are a victim of this scam, notify the proper authorities, such as the local police or the state attorney general’s office.