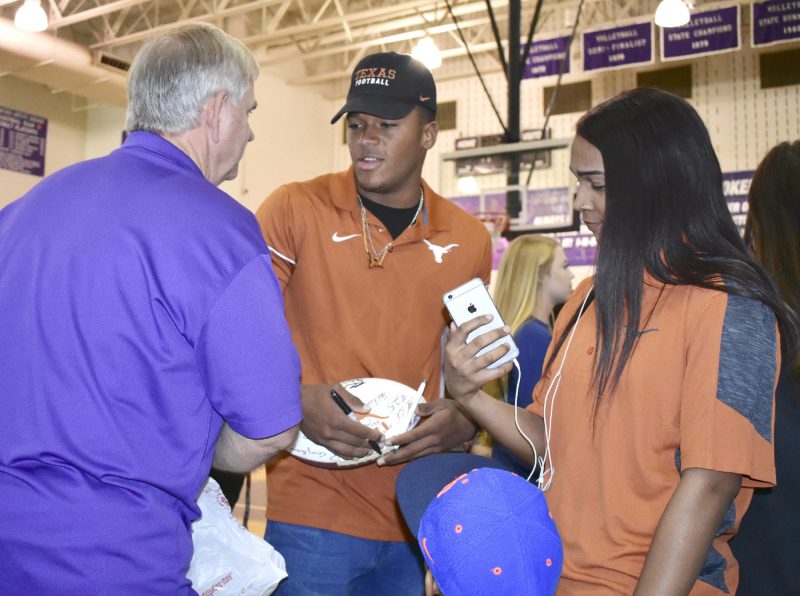 Doug Erwin of Port Neches, a 1968 PNG graduate who played football and is a University of Texas fan, asks recent Texas signee and PNG quarterback Roschon Johnson to autograph a football and helmet after a Dec. 19, 2018, signing ceremony at PNG High. Also pictured are Johnson’s cousins, Dajanae Alexander of Palm Springs, California, and Dallas Alexander, 4, of Houston. (I.C. Murrell/The News)

Johnson carried 21 times for 121 yards in the University of Texas’ 42-31 win at West Virginia on Saturday for his first career 100-yard game. Johnson’s rushing total is the biggest for a UT true freshman since Chris Warren III went for 276 yards on Texas Tech on Nov. 26, 2015. Seven of Johnson’s 21 carries resulted in first downs.

Johnson graduated from PNG last December and enrolled at UT the following month as a quarterback. The Longhorns’ backfield was thinned due to injuries going into the season opener against Louisiana Tech, prompting the coaching staff to move Johnson, who ran for nearly 5,000 yards at PNG, to running back. Johnson now has 268 yards and a touchdown on 55 carries, just 45 yards behind Keaontay Ingram for the team lead.

Johnson also has caught 86 yards and a TD on 10 passes.