The beat lives on: Southeast Texans made their mark on Woodstock 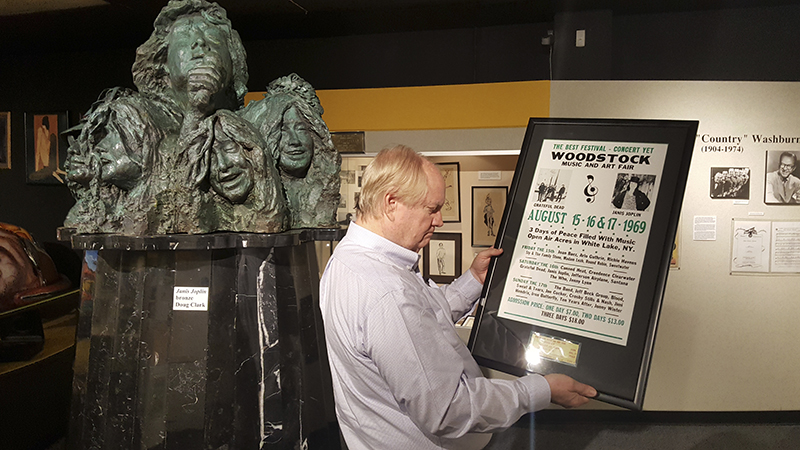 Tom Neal, director of the Museum of the Gulf Coast, holds a framed Woodstock poster that includes a Woodstock ticket donated to the museum by Trent Lassiter of Topeka, Kansas in the early 1990s. (Mary Meaux/The News)

The summer of ’69 — when Southeast Texas natives Janis Joplin, Johnny and Edgar Winter and Larry Graham wowed the crowd at Max Yasgur’s dairy farm during the Woodstock Music & Art Fair — was celebrated on its golden anniversary this year.

More than double the anticipated crowd made their way to the three-day festival in Bethel, New York, to hear the line-up of talent. 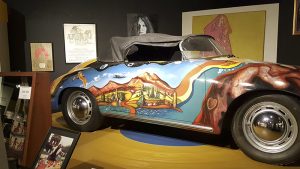 A replica of Janis Joplin’s 1965 Porsche 356 Cabriolet can be seen at the Museum of the Gulf Coast along with other memorabilia. Joplin’s original car, which had been displayed at the Rock and Roll Hall of Fame, was auctioned off by Sotheby’s in 2016 and sold for $1.76 million. (Mary Meaux/The News)

“Johnny had just signed with Columbia Records with a $600,000 signing bonus and was a blues guitarist,” Port Arthur Historical Society President Sam Monroe said. “Edgar had had success in his own right and had a different style (of music). Johnny was strictly the blues. He admired Muddy Waters and his goal was to play with him. Edgar had ‘Frankenstein,’ which hit No. 1 in the U.S. and Europe.”

Janis was successful as early as 1967 with her performances at the International Pop and Jazz Festivals in Monterey. She first recorded with the band Big Brother and the Holding Company and later with the Kosmic Blues Band and the Full-Tilt Boogie Band became an international sensation.

Graham, a Beaumont native, is credited with creating the “slap bass” sound and was an inspiration to the artist Prince. Graham performed with Sly and the family Stone and later in life formed Graham Central Station.

All four of these artists have a spot in the Museum of the Gulf Coast. 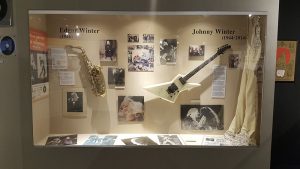 A display of Edgar and Johnny Winter at the Museum of the Gulf Coast. (Mary Meaux/The News)

Locals on the Woodstock phenom

Anna Christian turned 17 the summer of 1969 and was between her junior and senior years at Thomas Jefferson High School. And while she didn’t go to Woodstock, she loved the music of the time.

ZZ Top, “that little band from Texas,” played some early gigs at The Towne House in Groves and the Winter brothers played at the skating rink that was on Memorial Boulevard.

“It was a wonderful summer. A wonderful time growing up,” she said. “We all wanted to see the concert. It was a hippie time. We all dressed in bell-bottoms and hip huggers and tie die. Hippie wanna-be’s.”

Rhonda Carleton Richey was also a senior at TJHS when Woodstock happened but had no interest in the event.

Mark Ivey may have been too young to go but followed it religiously and burned through the Woodstock album, he said. He still has the album he replaced it with, scratches and all.

‪Tara Shockley was just 12 at the time and only vaguely remembers seeing it related on the news, but the legend of Woodstock lasted much longer.

“And by the time the album was available in Port Arthur, I was a full-fledged teenager and bought the album and later saw the movie. I think I still have my album, unless my son talked me out of it during his ‘return to vinyl’ phase,” Shockley said.

Shockley spoke with her son, now in his early 30s, and yes he does have her album and still listens to it, she said.

Candy Carr Howell didn’t go to Woodstock but went to the Texas International Pop Festival on Labor Day in 1969 where Janis Joplin, Chicago, Led Zeppelin, Sly and the Family Stone and Santana were some of the performers.

“It was too wild for me, a freshman at SMU,” she said.

It was an eye-opening experience for her, to say the least. 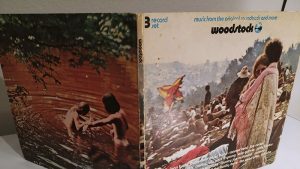 At quick look at Woodstock

Much has been written about the event itself. About how it was held at Max Yasgur’s 600-acre dairy farm, how Michael Lang, Artie Kornfeld, Joel Rosenman and John P. Roberts had a hand in the venture, of the rain and mud, the “free love,” drugs and much more.

“They knew it was a big event. They had water, sanitary (areas), electrical. All the things you need to serve a crowd and it was geared at 200,000,” he said. “The Saturday of the event people came pouring in, just walked in.”

The organizers were savvy though. They secured the rights to do a film and record the event, which was significant because of the nationally known stars there.

But some turned it down. Janis Joplin’s management is one of those who said no — this was because they were only being compensated for the live show, not the recording. 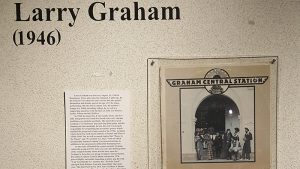 A display of Larry Graham at the Museum of the Gulf Coast. (Mary Meaux/The News)

The music lives on

Though 50 years have passed since Woodstock, the music lives on.

Joplin was one of only three women to perform at the festival and though she died of an accidental heroin overdose a little more than a year later at 27, she is considered by some as a symbol of women’s liberation.

Johnny Winter, considered one of the greatest guitar players of all time, was influenced by Muddy Waters and later worked with him.

His talent did not go unnoticed; he was inducted into the Blues Foundation Hall of Fame in 1988. He was professionally active up until his death at the age of 70 in 2014.

Edgar Winter dropped out of college to play jazz professionally and joined his brother when he received the Columbia Records contract. After Johnny’s two albums were released, Edgar started his own rock band, White Trash. Through the years he had a series of hits and remains active musically.

Larry Graham was part of Sly and the family Stone, the first rock band to be racially integrated and include women. His pop-and-slap bass guitar style can be heard on several of the groups’ singles

He later formed Graham Central Station, creating a number of hits. The artist Prince acknowledged the influence of GCS and his flamboyant stage show, according to the Museum of the Gulf Coast. He was still musically active by the mid-2010s.