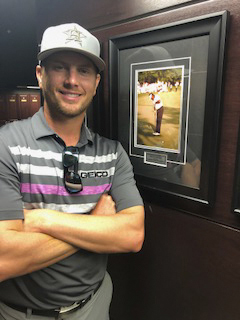 Chris Stroud, donning a Houston Astros ballcap, poses next to a frame of two-time Canadian Open champion Bruce Lietzke following the July 28, 2018, round of the tournament. (Courtesy of Chris Stroud)

Chris Stroud continued his solid play in the third round of the Shriners Children for Charity Open Saturday but once again couldn’t avoid throwing away a couple of shots on the back nine.

Stroud used a birdie-birdie start to post a four-under-par 67 at TPC Summerlin and reached the 54-hole mark at 202. However, he probably left the course thinking about the 3 foot, 8 inch birdie putt he missed on 15 and the par putt he didn’t get down from 3-7 on 17.

Stroud came out smoking, sinking birdies from 18-8 and 3-3 on the first two holes. He added a third birdie from 2-2 on the par-5 ninth, then got to four under by rolling in another birdie from 11-8 on 10.

For the second consecutive day, he drove the green on the short, par-4 15th. It took three to get down from 40 feet, however. He reached minus-5 on the par-5 16th by sinking a birdie from 13-4. But he gave that shot back by three-putting 17.

Stroud’s excellent day of ball striking was reflected by hitting 17 of 18 greens in regulation.