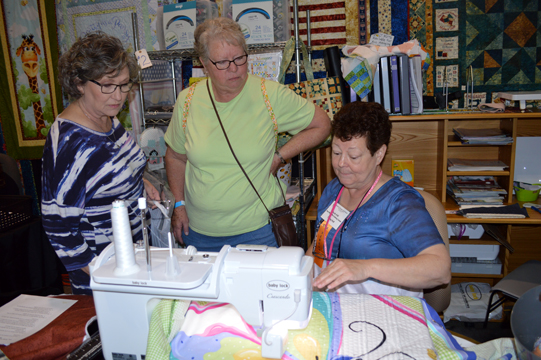 Tammy Holt remembers the day even though it was a couple of decades ago.

She was in her mid-30s and at the hospital with her sister. They were there as their mother underwent a mastectomy.

After the procedure was over, the doctor came out and said in all likelihood either Tammy or her sister would suffer from breast cancer.

Tammy took the warning to heart, going in for regular mammograms and routinely performing self-breast exams.

That process took the Nederland resident through November of 2006, when she found a lump on her left breast during a self-exam.

“Like a dummy, I put it off knowing full well I shouldn’t but I was running two businesses,” Tammy told me this week, while taking breaks to chastise herself for poor decision making. “I had to close one business in December of that year and get the other one leveled out. I waited until April of 2007 to go have my mammogram, which was my normally scheduled mammogram.”

She was diagnosed with breast cancer, and her doctor said if she waited another month it would have likely jumped to Stage 2.

She was quickly scheduled for a lumpectomy and then follow-up chemotherapy.

“I had three very rough months of chemo,” Tammy remembers. “Every month I had a serious reaction and landed in the hospital. I don’t know if the drugs were strong and my body was weak because I burned the candle at both ends being a business owner. Because I was having such bad reactions they let me skip a month to regroup.”

She had a mastectomy in October of 2007, opting for a double mastectomy to reduce the chances of the disease coming back later on.

She let her body gain strength and energy in 2008 and underwent breast reconstructive surgery in January of 2009, a procedure that proved especially rough, leaving her homebound for three months.

Tammy recovered to reopen her business — Sew Much More — on Boston Avenue in August of 2009 and hasn’t looked back.

Quarterly visits to her oncologist are no longer required but she still has regular health exams and blood work checks.

She does not have any daughters, but encourages her sons to be mindful of the disease, which also struck her grandmother.

She stresses to those women with a family history of breast cancer to be checked regularly and to know and examine their own bodies.

“With me, it was never ‘why did this happen?’” Tammy says today. “It did not surprise me. I feel like because I was told many years ago that I had a strong heads up.

“I’m not saying I breezed through it by any means. I am telling you, every chemo treatment I had I was at the emergency room and admitted. I had every side effect you could possibly have. Now, when I go to the doctor, I don’t want to know the side effects of stuff. Just do what you’ve got to do.”

I want to thank Tammy Holt for sharing her story. Our hope is that it serves as a celebration of perseverance and a warning sign to others about the value of early detection.

The Port Arthur News, in recognition of Breast Cancer Awareness Month, is going to feature a different woman’s survivor story each week on Thursdays, starting Oct. 10.

We thank our business and community sponsors that are supporting this effort for additional coverage concerning an issue that impacts so many.

As we continue to fight for a cure, please take the time to check yourself out for early detection and always support our loved ones suffering through this dangerous disease.

Stephen Hemelt is the publisher of The Port Arthur News. He can be reached at stephen.hemelt@panews.com