Bulldogs pull out broom against Rock-A-Noos 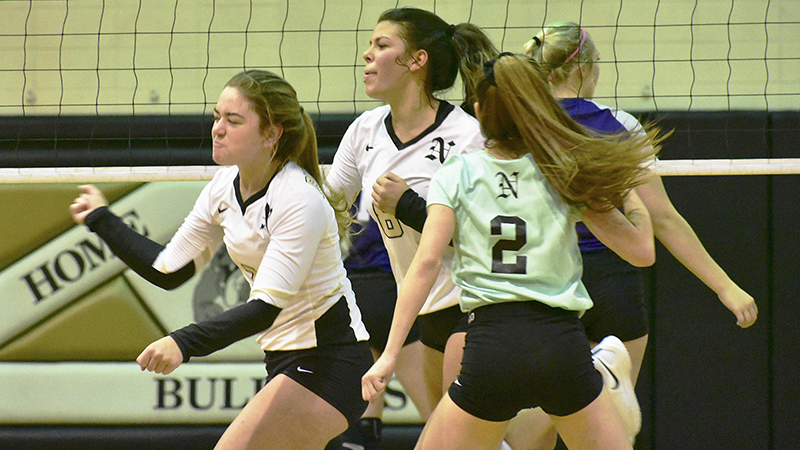 Kamren Savarino (7), Katie Perez (8) and Kaylee Adams (2) of Nederland react to a successful kill against PNG on Saturday in Nederland. (I.C. Murrell/The News) 10-5-19

NEDERLAND — A home sweep against Port Neches-Groves might be the result of a dream volleyball match for Nederland.

The Bulldogs lived out such a dream Saturday and took a 25-17, 25-16, 25-18 victory in the Dog Dome, completing a second makeup of a District 21-5A contest in as many weekends due to Tropical Storm Imelda.

“For us, we’ve been traditionally going 3-1 against most everybody this year, so for us to sweep anybody, it’s a feat in itself,” Nederland coach Allie Crommett said. The Bulldogs have swept Memorial and Cleveland in district play. 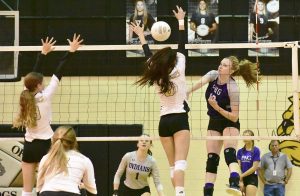 Karley McGill of Nederland successfully blocks an attack by Liz Bolyard of PNG in the second set Saturday in Nederland. (I.C. Murrell/The News) 10-5-19

Nederland (22-13, 5-1 in 21-5A) is one narrow set defeat to Barbers Hill away from being unbeaten in the district, but has earned a signature victory against its longstanding archrival Rock-A-Noos (14-18, 4-2). PNG had won eight straight matches against Nederland, dating back to 2016, until a two-set loss to the Bulldogs in the Dickinson tournament on Aug. 17.

The loss to Barbers Hill, which leads the district, was added motivation for the rest of the season, according to Crommett.

“We use that as fire under us to show people we really want to be district champs,” she added. 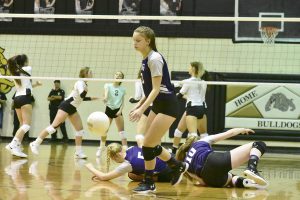 Reese Weatherford (3) of PNG react as Paxton Shults (5) and Liz Bolyard (10) miss on a dig attempt off a Nederland kill in the third set Saturday in Nederland. (I.C. Murrell/The News) 10-5-19

PNG earned a four-set victory against Vidor on Friday night after being swept against Barbers Hill on Tuesday.

“I think anybody would like to say that [playing Friday] had something to do with it, but where I hold our kids [accountable] and the standard I hold them at, I don’t believe it had anything to do with it,” PNG coach Brittany Fruge said.

The Bulldogs, who had a bye date Friday, dominated the contest and built their largest set lead at 22-9 in the second set before the Rock-A-Noos mounted a 5-0 rally. The third set remained close with both teams tied at 14 before Nederland could pull out to a 24-17 lead.

“We went back to our original lineup, just to see if the chemistry would make a difference,” said Fruge, her team battling numerous injuries throughout the season. “At the end of the day, we have to play low-error volleyball. We have to win the serving and passing battle, and Nederland won that battle. Hats off to them; they played a great ballgame.”

PNG’s Layla Adams was missing with a torn abdominal muscle on Saturday, according to Fruge. The coach herself has been coaching through pain in her right arm following surgery for a broken bone sustained in a weightlifting accident. 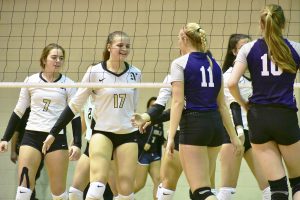 “We really looked for the holes and recognized where they were blocking to avoid the blocks they put up for us,” she said.

PNG statistics were unavailable, but Brekel called the defensive effort against the tradition-rich Rock-A-Noos “stressing,” although successful.

“We just had to focus on our reading and go for every ball,” she said. “I was stressed out today.”