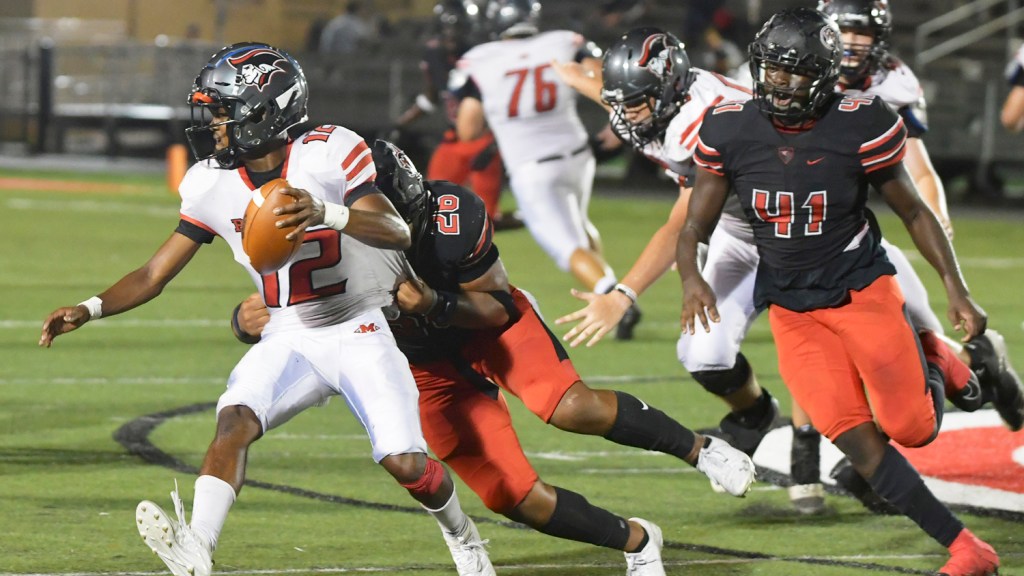 Port Arthur Memorial made big plays on offense, but it was going to take a defensive stop to all but end Goose Creek Memorial’s night.

Junior Maleek Jones came from the backfield to make a sack on fourth-and-2 with less than 3 minutes to go, and the Titans picked up two first downs on its final drive to seal a 20-12 win Thursday night.
“I had just seen [quarterback Daniel Pitre] pick his arm up,” Jones said. “I hesitated for a little, but he dropped it back and I got him.”

Jah’mar Sanders threw for 211 yards on 14-of-22 passing with no interceptions to key the Titans’ offense. 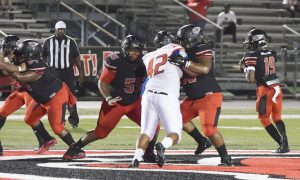 Tre’Vonte Caines (55) and Ja’Shawn Jean-Louis of PA Memorial block Joshua Tarver of GCM as quarterback Brian Milton drops back for a pass Thursday night in Port Arthur. (Jereem Augustine/Special to The News) 10-3-19

“The most important thing, I told our guys, is to finish 2-0,” Titans coach Brian Morgan said. “We fought through some adversity in the second half. We had some mental busts and a lack of focus, offensively, but I thought our defense played their butt off the whole night. You can see as the season goes on and the teams come around, we have a lot of sophomores and juniors playing, and each week you see progression. That’s really good to see, so I’m excited about that.”

Titans running back Kason Williams rushed for two second-quarter touchdowns. He scored from a yard out with 11:19 left before halftime, and 8 minutes later took a screen pass 44 yards to set up his 7-yard scoring rush.

Williams rushed 10 times for 52 yards. Sanders led a balanced rushing attack with 69 yards on 15 keepers, and Branden Chaney had 56 yards on 19 carries, including a 15-yard touchdown tote in the first quarter.

The Titans elected to play on a Thursday since classes in the Port Arthur ISD will not be held Friday due to a staff development day. It was their second straight Thursday game, having beaten Galena Park on the road last week.

A fumble after an 11-yard completion from Pitre to Emerson Haywood, who shared some quarterback sacks with Pitre, late in the second quarter fell into PA Memorial’s hands at its own 49. Williams then took a screen pass for his biggest gain of the night and punched the ball into the end zone on a 7-yard carry the next play, expanding the lead to 20-2 following an extra point. 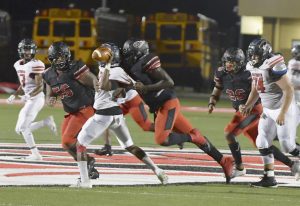 The game changed when …
GCM stormed back in the second half with a Luis Acosta 23-yard field goal and 7-yard Pitre touchdown keeper on consecutive drives. The Titans fumbled just shy of the end zone early in the fourth quarter but would force the Patriots to punt for a second straight series. GCM’s final series went 10 plays and 50 yards before Jones, who played both cornerback and safety Thursday, came up with the sack.

“We had to communicate,” Jones said.

The game ball goes to …
Williams for his two touchdown runs.

Up next …
The Titans will host New Caney at 7 p.m. next Friday. New Caney (4-0, 1-0 before Friday’s game against Galena Park) handed PA Memorial its lone district loss of 2018.

“It’s no different than this game right here,” Morgan said. “We have a goal, and that’s to win each week. New Caney just happens to be there and New Caney is a good team. But our guys will be ready to play.”

GCM will visit Porter next Friday.