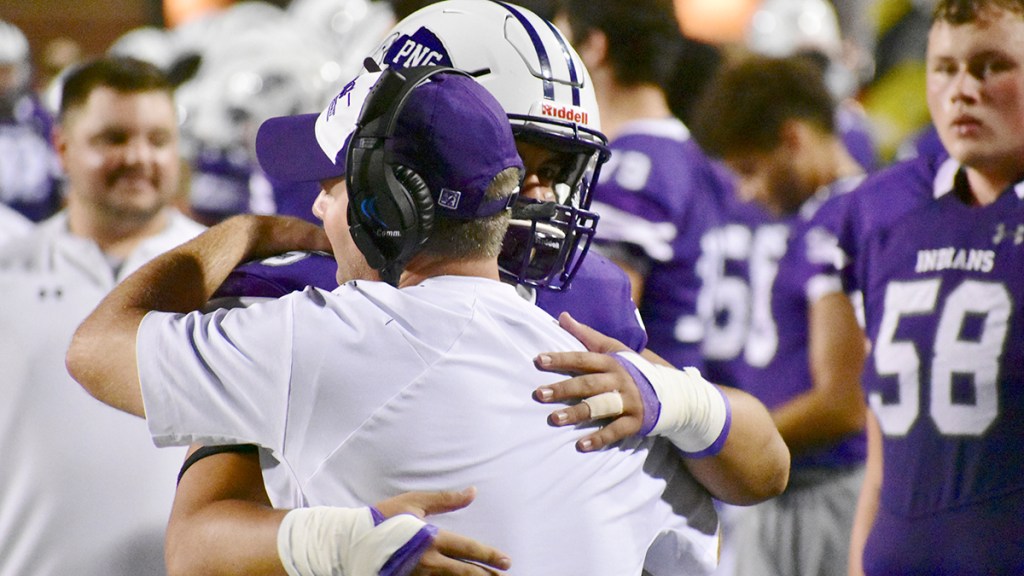 PORT NECHES — Port Neches-Groves’ 38-32 home win over Vidor last year was not indicative of a district-winning team taking on a playoff-missing team.

It took a Roschon Johnson quarterback keeper with 1:28 left to put the Indians back in front. PNG went on to earn the No. 1 seed out of District 12-5A Division II.

For the second time in three years, Vidor (2-1, 1-0 in 12-5A-II) is drawing extra motivation from the hardships induced by natural disaster. Tropical Storm Imelda was not enough to force the district to stagger some of its games into school-night kickoffs, as Hurricane Harvey did two years ago, but it did keep students at Vidor out of school for eight days, with the youngsters returning to class Tuesday.

The Pirates, meanwhile, have won two straight, including a 37-27 district-opening win over Crosby last week.

“These kids that I coach are just warriors,” 21st-year Pirates head coach Jeff Mathews said. “I’ve been here long enough, 28 years, that they’re parents are warriors. Their ability to get back up never stops to amaze me.”

Vidor continued to practice amid Imelda’s wrath but not with a full team. Mathews and his staff worked with each player present in practice and installed the game plan he had for the now-washed out Little Cypress-Mauriceville contest against Crosby the next week.

“We basically used the game plan with LCM because they were most familiar with that,” Mathews said.

At Vidor, buying into Mathews’ longstanding Wing-T offense is a requisite for success. The Pirates’ 442.3 yards per game of offense slightly tops Barbers Hill’s 436.8 for best in District 12-5A Division II, and better than 80 percent of Vidor’s offense comes on the rush.

The challenge of disrupting such an offense is each player sticking with defensive assignments, or in football jargon, reading his keys.

“You’ve got to be disciplined and look at your keys,” Faircloth said. “That’s hard for high school kids, sometimes. It’s definitely a read-your-key type of defense [we play]. … So, a secondary man might be following the tailback. The linebackers may be watching the guards. They’re all watching somebody different, how they gameplan. We call it eye discipline. Your eyes have to be in the right spot at all times. You can’t fall for all the misdirection and that kind of stuff that’s there to confuse you.”

“They’re complete in all phases,” Faircloth said of Vidor. “They play great on defense. They run around, they’re tough, great offensively. Of course it’s different, not like anybody else does. So, it’s unique to us. We only have four days to prepare. And they’re solid on special teams.”

PNG has won six straight against Vidor, the Indians’ last defeat happening in 2012 when Vidor went 9-2 and PNG fell to 2-8. While most of results may indicate otherwise, the clash of playing styles from the Pirates and Indians is helping another rivalry brew in Southeast Texas.

“Since I’ve been here, I never got to play PNG in high school,” said Mathews, a 1985 Bridge City graduate. “When I came here, that was the team Vidor wanted to play. PNG has been a quality team year in, year out.”