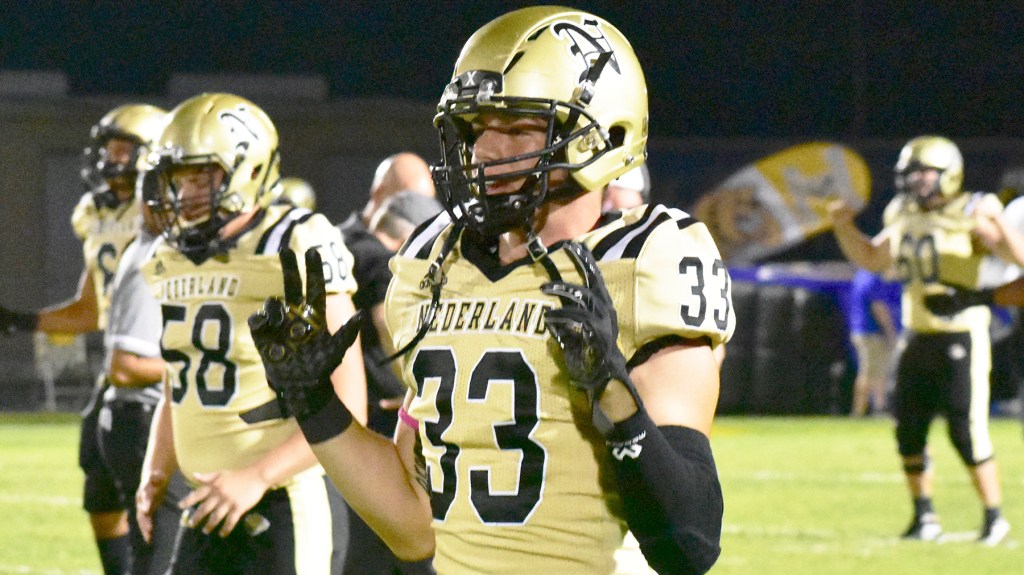 Jack McGuire (58) and Blaze Crowder-Brown (33) of Nederland warm up following a lengthy delay prior to kickoff against Barbers Hill on Friday. (I.C. Murrell/The News) 10-4-19

NEDERLAND – Lightning seemed to be the only thing that slowed down the Barbers Hill Eagles on Friday night against the Nederland Bulldogs.

The Eagles (4-1, 2-0 in 12-5A-II) scored just 61 seconds into the game that was delayed for 93 minutes at the start by lightning and never looked back, racing to a 27-0 at halftime en route to a 40-14 win over the host Bulldogs in the District 12-5A Division II game that ended around midnight.

Nederland (1-4, 1-1) was held to just 59 yards in the first half, while Barbers Hill had 229 yards over the first two quarters as the Eagles dominated the line of scrimmage on both sides of the ball. For the game, Barbers Hill had 309 total yards, while Nederland finished with 288.

Nederland avoided the shutout with a pair of fourth-quarter touchdowns. Quarterback Bryce McMorris connected with Kyndon Fuselier for a 69-yard TD pass that saw Fuselier break several tackles. Josh Mazyck scored on a 2-yard run for the Bulldogs.

Barbers Hill also dominated on special teams, scoring a pair of TDs. Kade McCall scampered 62 yards with a blocked field goal attempt for a TD while Rex Thompson scored on a 55-yard kickoff return as he scooped up a Nederland onsides kick attempt.

Barbers Hill drove 51 yards on just three plays o the game’s opening drive to take a 6-0 lead with 10:59 left in the first quarter. The drive was capped by Hagler’s 18-yard run.

Kyndon Fuselier who had three receptions for 118 yards and a TD for the Bulldogs.