Indians stage comeback after many delays 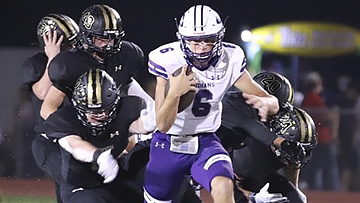 PNG quarterback Blake Bost tries to escape a pack of Vidor defenders during the first half Friday night in Vidor. (Leo Weeks Photographers) 10-4-19

VIDOR – It was, indeed, a strange night here Friday night in Vidor. But it’s one Brandon Faircloth’s gutsy Port Neches-Groves Indians will remember for a long, long time.

Using fumble recoveries by Christian Sullivan, Donald Kinnett and Caison Denzlinger in the second half, and big-play tackles from Josh Patteson and Santiago Agudelo in the fourth period, PNG outlasted Vidor, 18-10, in a game that didn’t end till 12:30 a.m. Saturday.

Holding the district No. 1 offense to only three first downs in the second half and to only 195 total yards, the Indians improved to 4-1 on the season, but more importantly to 2-0 in 12-5A play. The Pirates, who entered the game averaging nearly 480 on offense, fell to 2-2 and 1-1 in league play.

Sullivan got things going early in the second half when he recovered a Vidor fumble at the Pirate 10 on the second play of the third.

After bogging down, Indian sophomore kicker Tate Sandell drilled a 29-yard field goal with 9:56 of the third and the visitors were back in business trailing just 10-3.

But in the fourth period, Patteson drilled Vidor quarter back Dylan Dial on fourth-and-12 at the Indians 34.

Thirteen plays later and 66 yards later, junior quarterback Blake Bost scored the first of his two fourth-quarter touchdowns. Zane Hernandez plowed into for the two-point conversion behind the blocking of Rob Rector, and the Indians took their first lead of the night, 11-10, with 5:34 left in the game.

In the drive, Bost hit Ryan Sosa for a 15-yard strike to the Pirate 1.

Bost, who completed 17-of-28 passes for just 136 yards, again threw no interceptions. And in this go-ahead scoring drive, the slender lefty was outstanding completing 8-of-9 passes for 59 yards.

Following Kinnett’s fumble recovery at the Pirate 23 with 3:06 left in the contest, Hernandez went for five to the 18, then Bost on a run-pass option took off around the left side and scored to make it a 17-10 Indian lead with just 2:14 to play. Sandell’s kick made it 18-10.

On the Pirates’ final drive of the night, Denzlinger recovered a Brad Nunez fumble at the 26 and the Indians ran out to clock to get out of town with a thrilling win.

Lightning strikes had delayed the contest against Vidor 42 minutes just prior to kickoff. Then again with the Pirates leading 7-0 with 0:30 left before halftime, lightning strikes within 2 miles away again forced both teams and a lot of fans scurrying for cover. That second delay last nearly an hour-and-45 minutes.

When the teams headed to the locker room following the second weather delay, the story of this contest was the defensive effort by the host Pirates.

Holding the Indians to only 1 yard rushing on eight carries, and only 74 yards through the airways, the district’s No. 1-ranked defense showed it was obviously for real and led 7-0.

Senior halfback Zach Seigrist had put the Pirates on top with 6:16 left in the second quarter when the 190-pounder wheeled his way 5 yards around the left side of the Indian defense for a touchdown. Danny Lee kicked the PAT and it was 7-0.

Seigrist, 12-5A’s sixth-ranked rusher, was also the catalyst in the biggest play of the Pirates’ 66-yard, 11-play drive when he took a snap from center and on a misdirection play, bootlegged his way 24 yards to the Indian 9.

It was decided that although 30 seconds remained before halftime, due to the 30-plus minute weather delay, there would be no halftime. The two teams would run the final 0:30, then there would be a timeout and they would start the second half.

In the first half, the Indians, who came in averaging 356 yards a game through their first four contests, were held to an almost dead-start with just 1 yard rushing on eight carries and just 74 yards through the air.

At the start of the third period of this weather-delayed battle when Indian defender Christian Sullivan recovered a Vidor fumble, setting up PNG first score of the night after they had been blanked for the first two quarters.

PNG defenders Christian Sullivan, Donald Kinnett and Cason Denzlinger, who each had fumble recoveries in the second half, which led to all 18 of the Indians’ second half points.

The Indians play host to Crosby next Friday at The Reservation. Kickoff in this District 12-5A Division II contest is set for 7:30 p.m.

— By Larry Bodin, Special to The News