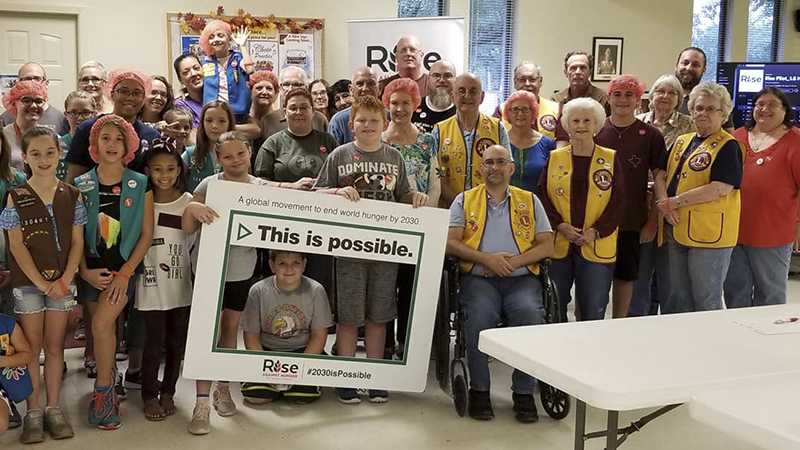 PORT NECHES — For every 1,000 food packages prepared, a participant bangs on a gong and everyone cheers. It takes a while to get to the first 1,000, but by the time everyone is working and getting the process down, the gong starts ringing out faster and faster until all 10,152 meals are packaged for Rise Against Hunger.

The Rev. Mark Ellis Chambers at Holy Trinity Episcopal Church in Port Neches says the meal-packing event can go by quite fast.

“We did about 10,000 meals in about an hour and 15 minutes,” he said. “We’re playing music, everyone’s getting together to do it, we had two Girl Scout troupes, the Lions Club and members of our congregation and other members of the community.

“Every bit of it is a bunch of fun. The great thing is everyone can be involved.” 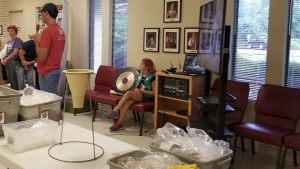 The gong, which rings for every 1000 food packages put together, stands by for the start of Holy Trinity Episcopal Church’s Rise Against Hunger packaging event in 2018. (Courtesy photo)

The church will be hosting its next meal-packaging event from 1­–3 p.m. Oct. 19. Chambers encourages anyone in the community who wants to participate to come by.

Chambers started participating in the Rise Against Hunger events during his time in seminary in Virginia, where the church he was serving had already begun their own events.

“I walked into it because the church I went to was already doing it,” he said. “My family loved it so much we said we have to continue to do this, so we did it for two years at that church while I was there. The next year I was at a church in Austin so I brought it there, then I brought it down here when I started at this church.”

Rodney Powell, longtime member and church sexton, said seeing the children participate is one of the best parts of the event.

“It’s a wonderful program,” he said. “You give back, and it’s fun. A lot of things that we do aren’t fun. This was fun. And the kids! We’re talking about kids that were 5 on up, and they all want to be doing something. They think that they can do anything, and they do!”

How quickly the participants prepare the food packages can depend on how many people participate. The process is organized like an assembly line, where tables are set up with funnels and measuring cups to partition the food into individual packages that can each feed six people. The packages are brought to another to close by heat sealers. Children often get to serve as carriers between the tables. 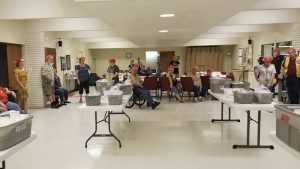 Tables are set up as packaging stations in the church hall during Holy Trinity Episcopal Church’s Rise Against Hunger packaging event in 2018. (Courtesy photo)

The packages are sent along to be counted and boxed until 10,152 packages have been prepared.

10,152 is the minimum number of packages Rise Against Hunger requires to be sent by organizations that participate. Chambers said it’s a reasonable number for his church community to meet. He said Christ Church Cathedral in Houston recently managed approximately 100,000 packages.

The church will learn where their packages will be sent in about a month. Impoverished areas or disaster zones are the usual destinations. Chambers said last year their packages were sent to Honduras and El Salvador.

Rise Against Hunger provides the food, rice and textured vegetable protein mixture fortified with vitamins that can serve as a complete meal.

Powell thinks the mixture might do well with some sausage added, having tried the food before at previous packaging events and noting it can be quite bland, though recipients often add their own local spices or foods to supplement the meals.
The Church needs to raise $3,451.68 to buy enough food for the 10,152 packages. Chambers said they are about halfway there.

“We’ll get there, it always happens,” he said.

Rise Against Hunger prepares millions of nutritious meals annually at 34 cents a meal that are distributed all over the world to folks in need. Rise Against Hunger also promotes better farming practices, business skills and market access. The group’s goal is to end world hunger by 2030.

“Anyone can come and participate; it’s open to everyone that wants to come,” Chambers said. “We’d love to have people from the community.”