Titan Thursdays: Battle of Memorials not sign of short week 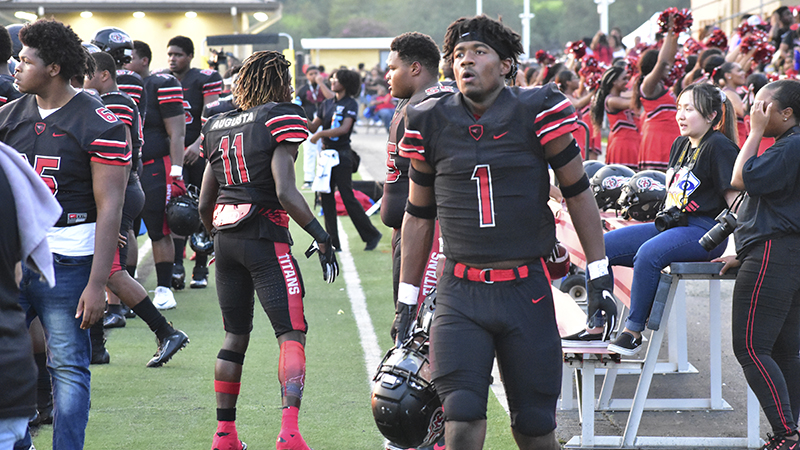 When or where the football lights are turned on doesn’t matter to Kason Williams.

“It ain’t nothing,” the Port Arthur Memorial senior running back said. “It’s all the same to me, Friday and Thursday. It’s just that we’re at home. We’re with the community now.”

For the second week in a row, Williams and the Titans (2-2, 1-0 in District 9-5A Division I) are playing under Thursday night lights. That means they didn’t exactly have to face a short week to prepare, treating Friday practice like a Monday ahead of the arrival of Goose Creek Memorial (2-2, 1-0) at Port Arthur’s Memorial Stadium.

So far, Thursday has worked out for PA Memorial. The Titans won at Galena Park a week ago.

“We practiced on last Friday after the game, so we kind of treat it like a normal schedule, other than, [the game is on] a Thursday instead of a Friday,” Titans coach Brian Morgan said. “So, we are ready to go. Thursday night, we were fortunate to move it just because there is no school. The kids operate better when there’s a routine of going to class and you don’t have to worry about sleeping in all day and doing what teenagers do. Thursdays are a good deal for us, this week in particular.”

Classes will not be held in the Port Arthur ISD on Friday due to a district-wide professional development day. With a key showdown against New Caney in Port Arthur on Oct. 11, the Titans wish not to make the eight-day break feel much longer.

Titans senior Tavian Gipson, the 9-5A-I leader in number of receptions, believes the offensive line — which has established its own award for the top-performing player — will help set the tone, as it did at Galena Park.

“It’s fun,” Gipson said of the offensive line’s Pancake Chain, awarded to the “Pancake Champ of the Week,” “It’s a flex fun. We flex with it on social media. We worked hard to get it. It’s a good feeling.”

Gipson’s seven catches for 81 yards raised his season total to 16 for 155 yards. Kingwood Park’s Canen Adrian has 14 catches, but for 221 yards and three touchdowns.

The Patriots’ 435.5 yards of offense per game will present a test to the Titans, who allow 256 per game. Morgan, though, sees some similarities in GCM’s game to Galena Park’s, aside from both teams being 2-2 and 1-0 in district.

“They have two quarterbacks they split time with,” he said. “They’re very athletic. They’ve got some skill guys who look like they can run a good bit. I think we’ve got a chance to be in business. We ought to be able to handle business, but you never know.”