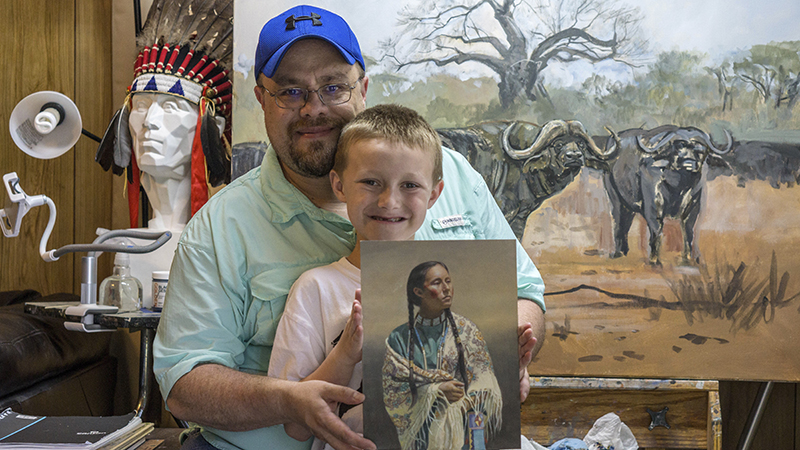 Calvin Carter, and his son, eight-year-old Austin, present one of the paintings Carter has done in the past several years in his home studio in Port Neches, Aug. 12. (Cassandra Jenkins/The News)

Hunting trips to Alaska. Photoshoots from the sky. Fishing in remote villages and visiting Native American reservations. It is all in the day and life of Calvin Carter — but you wouldn’t know it by just looking at him.

Carter lives a comfortable life tucked away in a modest house in Port Neches with his son, Austin, choosing to put his efforts into adventure, talent and passion.

Carter is an artist, in all senses of the word — photographer, painter, drawer, teacher.

“I think what I really enjoy about being an artist, more than anything else is what David Drinker, a well-known Beaumont artist, said to me a long time ago, he said ‘Calvin, you’re probably never going to get really rich off of this, but you’ll get to do a lot of really fun, cool things’ — and I have.”

“I’ve been able to live on 5,000-acre ranches and get paid to go do it. I got to go this summer with my son to Baffin Bay, a big fishing resort that people usually have to pay to go to. We’ve done some photography from a helicopter. I had a customer pay to fly me to Alaska to fish with him, take pictures and do a drawing. We get to do a lot of cool things like that, things we might not get to do if it wasn’t for the artwork.

“The people I’ve got to meet, the things I’ve got to do and see, it’s been the most valuable part of it.” 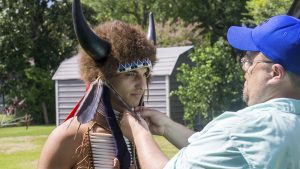 Calvin Carter prepares his models for a photoshoot at his home in Port Neches, Aug 12. Carter, who paints Native American portraits, strives for authenticity and realism by using traditional dress and headgear during his shoots. Both Mayra Hernandez, 19, and Dakota Sanchez, 18, have been modeling for Carter for several months. (Cassandra Jenkins/The News)

While Carter has painted hundreds of commissions, taken thousands of photos and sold paintings to museums and galleries all over the U.S., he started out like everyone else — selling paintings at $20 a pop to pay for new Air Jordan’s.

“My mom said I have been painting since I was 5 or 6 years old, that’s when I won my first art contest when I was in kindergarten — I’ve done it ever since then,” he said. “I remember selling paintings as a kid for $20 and I thought it was a big deal, now I sell them for way more than that.

Carter, who grew up in Hempstead, enrolled at Lamar for a bachelors in studio of fine arts where he studied under the late professor Jerry Newman. While there he entered an art competition at the Port Arthur Texas Artist Museum.

Although he knew he had talent, Carter took a long break from professional artwork after college, becoming a teacher at Somerville ISD and Pineland before settling down at Port Neches-Groves High School, where he teaches still.

“But when my son was born, I thought I needed to get serious about (art,)” he said. 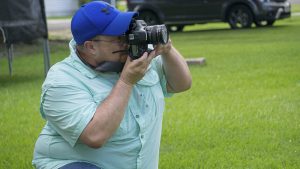 Calvin Carter, an artist from Hempstead, shoots his own photos in the backyard of his home in Port Neches, Aug. 12. Carter takes photos of his models in traditional Native American dress to understand the body and fit before later painting the scene. (Cassandra Jenkins/The News)

Carter found a niche for photographing and painting wildlife and sporting game.

“When we talk about sporting art, it means hunting and fishing type artwork, not sports,” he said. “I started doing a lot of commissioned works and doing the stamp prints. I did a lot of those for the state of Texas.”

Carter designed numerous covers for wildlife magazines, like Texas Outdoors, but saw the business decline and steered in the direction of Native American art.

“About three or four years ago, sporting and wildlife business started going under,” he said. “I wasn’t seeing a lot of sales like I had been before, so I started doing some other stuff like portrait photography. Two years ago, I had some buddies who were Western artists. One of them who I’ve known for years, Tim Vanya, has done a lot with the Houston Livestock Show and Rodeo and all over Texas. He asked if I had thought about doing Western art, but it didn’t seem very appealing at the time.

“The other guy, Clyde Lewis, said he did Native American art. I didn’t want to do it unless I could do it with some authenticity and respect for the people, and have their approval to do this as well.”

It wasn’t long before Carter met other figures that would further steer him in the direction of Native Americans.

“Michael Badhand works all over the country with artists, and what he does is he goes onto actual locations with Native Americans,” he said. “He does photo shoots and sells the photos for us to use as actual documentation. He works with mostly Crow Native Americans and Lakota’s. I started trying it out and I got into my first show six months later.”

A CAREER IN NATIVE AMERICAN ART

Carter said he took to the Native American art rather quickly, falling in love with the history, the stories and the people. He said the hardest part is making sure the work is authentic to each tribe’s culture and ancestry. He referenced works by Carter and Weidner who have done a lot of research and history on Native American cultures.

“Weidner, Carter and Ron Mrochko were three guys who really took me under wing and taught me history and respect for the different Native American cultures. They also work with the Southern Cheyenne’s, so they have a lot of approval to be doing this stuff,” Carter said. “Some Native American’s would prefer us to not be doing this, but a lot of the elders are OK with it because they like to see their culture get pushed on.

“They just want people to embrace their culture and get to know about it, so it doesn’t die off.”

Carter said he immersed himself in the work and process, which is a mixture of modeling, photography, designing, painting and detail checking.

“What I do is get someone to model,” he said. “It’s like having a little statue that wears the clothes, and then I go look at the old photographs. I go and take these faces from the past and that’s where I get my characters and features. I’m not doing an exact portrait of that person. It’s a bunch of compiling. It’s like putting a puzzle together. It’s a mixture and an ever-changing process.”

Carter’s has commissions all over the country and his work can be found in museums and galleries across Texas, including the Pierce Museum in Corsicana. He also has a sculpture outside Saint Anthony’s Basilica in Beaumont.

“My artwork was accepted into the Bosque Classic last year in Clifton,” he said. “It’s a national show. I had three pieces accepted for my first time to ever enter it. This year, I also have three pieces accepted. There’s also a new gallery opening up that I was invited to be a part of called The Lost Creek Gallery.”

The Lost Creek Gallery is located in Calvert and opened last month.