Blake Bost settles in as Indians’ “No. 1 guy” 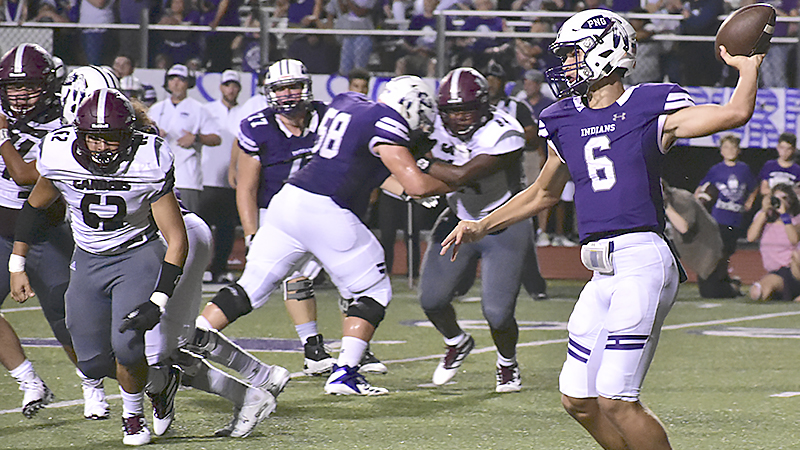 PORT NECHES — Blake Bost’s three-touchdown passing performance in Port Neches-Groves’ victory over Baytown Lee was a result of his maturation at quarterback.

“I think just getting reps,” said Indians head coach Brandon Faircloth, Bost’s quarterbacks coach. “Last year, he played on the varsity and did really well. It’s also a little different when you’re the No. 1 guy, and it’s all on your shoulders. Blake’s a very smart kid and learns from every rep.”

Speaking of repetition, Bost completed 24 of 37 passes for 263 yards, about two-thirds of the Indians’ total yardage in a 31-14 win. The junior set season highs in passing attempts, yardage and touchdowns.

“Blake was on the varsity and got to play quite a few games,” Faircloth said. “He was at practice with Roschon Johnson every single day. I think that speeds it up. He’s with Roschon every day. He learns every day, and he also gets to go in and play some varsity football games. So, when it’s your time to play and already be the starter, you already bring experience to the table, and I think that’s been really important for Blake.”

Wooley has 13 touchdowns to Bost’s six, but Bost can claim the head-to-head victory.

“Practice has been really important to him, and you can see his play every game has gotten better and better and better,” Faircloth said of Bost. “He’s gotten the ball out of his hands faster. He moves in the pocket faster. The more you play, the better you get. He’s had a great season so far, and we’re looking forward to Friday night.”

Bost’s offense will have to outdo Vidor’s run-happy, Wing-T system, which boasts the leading rusher in 12-5A-II, senior Brad Nunez (410 yards, five touchdowns). As long as neither he nor the Indians turn over the football, Faircloth thinks all will be well on the road.

He already knows Bost, who has thrown only two interceptions, values the rock well.