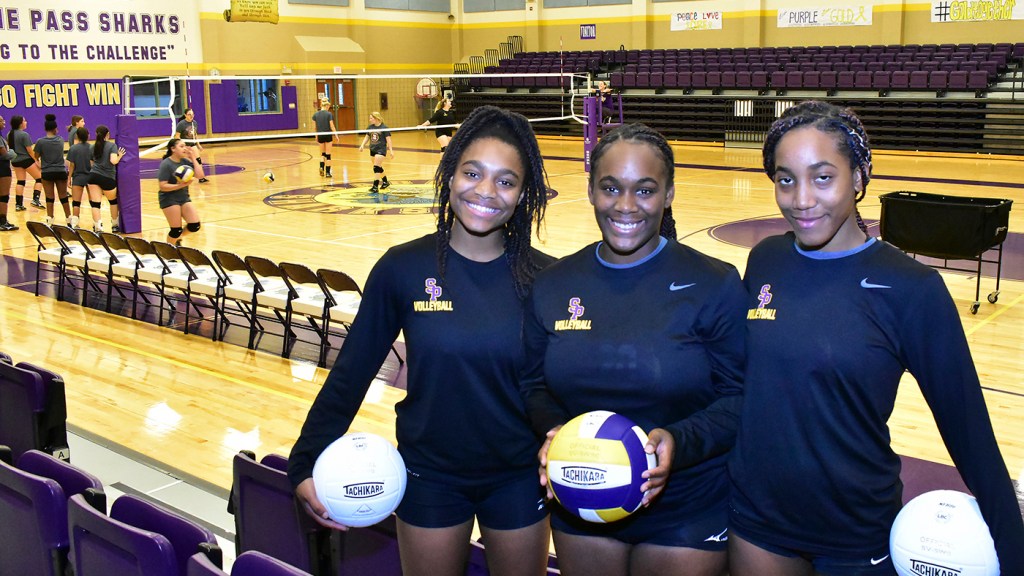 SABINE PASS — Andie Myers knows what it’s like to play with a sister. She was a senior at Bridge City in the 2005 season when Audrey was a sophomore.

Fourteen years later and two bridge passes to the south, Myers is coaching a trio of sisters at Sabine Pass, much to her delight.

“I’m constantly putting in their names first for stats,” Myers said. “[I’m asking myself] ‘Should I have digs for her?’ or ‘Do I need to have blocks for these two.’”

Here’s evidence that senior Jamesia Jones, sophomore Nevaeh Jones and freshman Charnel Jones can fill up a stat sheet: During Friday’s home win over Hull-Daisetta, Nevaeh led the offensive charge with 10 kills, seven blocks and six aces; Charnel threw in nine kills and Jamesia ruled the defense with nine digs. The Sharks (13-6, 5-2 in District 24-2A before Tuesday’s match with Deweyville) needed five sets to earn their fifth straight victory.

The sisterhood in Sabine Pass volleyball is real.

“It’s pretty tight,” Jamesia said. “We all don’t play together [on every rotation]. I play on the back row for them. If they mess up, I tell them what to do.”

Jamesia’s leadership is similar to that in the Jones household, where the communication on the court carries over. Well, if only for a little while.

“At home, we talk to each other, but we’re not always together,” Charnel said. “We’re all in a different corner around the house. When we play sports, that’s our bond. It brings us closer.”

Nevaeh noticed a difference in the communication among the Sabine Pass players on the court, one of the team’s basic keys to success.

“It’s better” compared to last year, when the Sharks missed out on the 2A playoffs by a single match, Nevaeh said. “It wasn’t good for last year, but it would’ve been better if the back row said something.”

Good thing a familiar voice in Jamesia is a libero.

The Jones sisters are among Stephen and Jennifer’s five children. The oldest, Jamyus, 19, scored 55 points in a basketball playoff loss to Lufkin’s Pineywoods Community Academy as a Sabine Pass junior in 2017.

The next year, he guided Memorial to the 5A state championship. He’s now a sophomore on Lamar State College Port Arthur’s basketball team.

The youngest, Hudson, is almost 3 years old. If he’s anything like his older siblings, he’ll play more than one sport, as the sisters all play basketball and run track.

Charnel and Jamesia play softball, and Nevaeh is active on the tennis court. Jamyus was an area champion long jumper at Memorial.

“We’re competitive in everything we do,” Charnel said.

These days, the older Myers enjoys the much-needed cohesion of sisterhood on the volleyball court and the impact is has on the Sharks’ win-loss record.

“We’re playing as a unit, how I want them to communicate more and being more positive,” Myers said. “We can’t play negative because we don’t do good that way.”