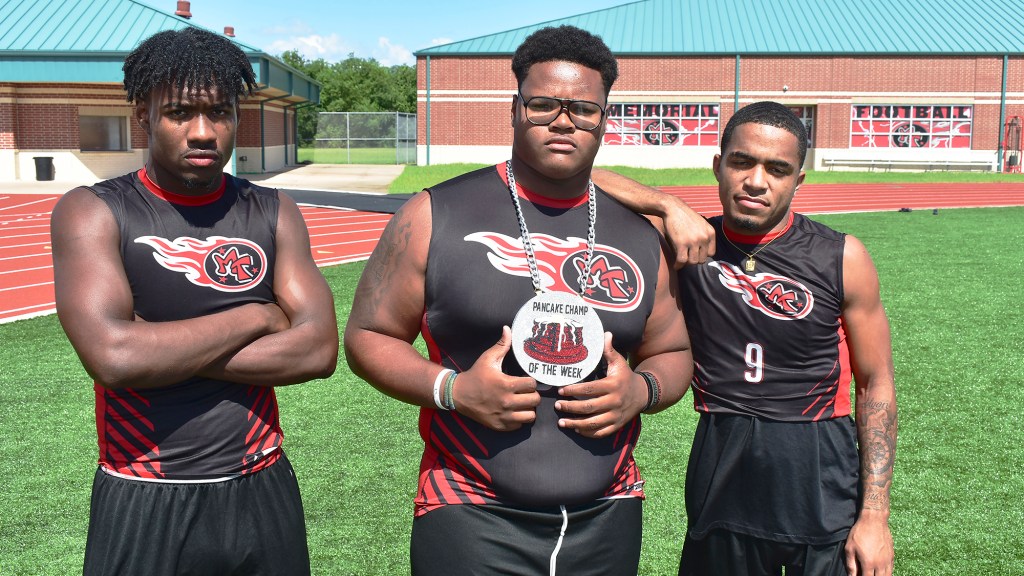 Earning a “pancake” block as an offensive lineman is a big deal. In Port Arthur, winning the Pancake Chain is another.

“It’s something where we had a parent with an idea donate it and put the idea together,” Memorial coach Brian Morgan said. “It’s a way to get those guys recognition that they probably don’t get or the credit because they don’t make the newspaper each week.”

“It feels good to get the award, knowing that I’m working hard for it and my teammates are pushing me to work hard,” Caines said. “It’s going to build our competition.”

Morgan defined a pancake as a defensive player being on the ground and an offensive player finishing the block on top of the defender. In the NFL, blocks in which an offensive lineman knocks a defender on his back are considered pancake blocks.

But football’s pancakes aren’t the biggest factor in winning the Pancake Chain.

While offensive linemen — except for tight ends — don’t carry, catch or throw for yards, a team’s total yardage can reflect their performance as a unit.

“I’ve been used to our offensive line,” Williams said. “They’ve always been opening the gaps for us. We’ve got a nice offensive line this year.”

“The o-line is a huge part of the run game,” Morgan said. “We bring it together and we play with tempo.”

Speaking of tempo, Caines added: “If we play fast, can’t nobody play with us.”

Senior Trey Rodgers and Caines are the only returning starters on the line. Rodgers is expected to return to left tackle this week after missing the past three games to injury.

For now, the Titans’ front line has shown plenty of growth.

“We’re going to be good,” Caines said. “If we mess up, coach Morgan will say, ‘Just play the next play.’ Whatever happens, we’ll be all right.”