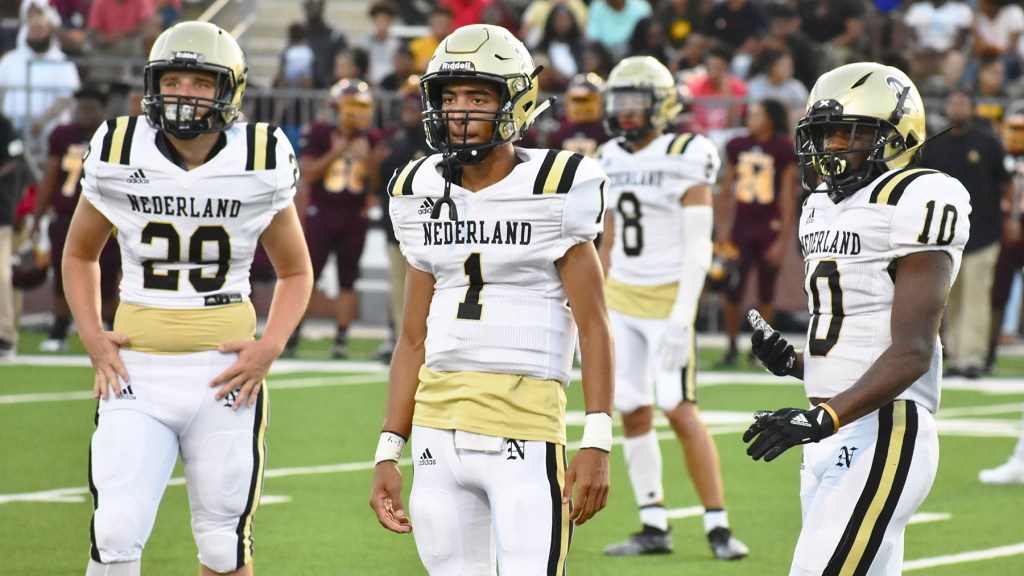 NEDERLAND — Bryce McMorris threw four touchdown passes in Nederland’s 48-0 shutout win at Santa Fe on Friday night, and each one went to a different receiver.

The final score was not indicative of a team that started winless through three games.

“I think everybody started to click with everybody, realizing that we were really 0-3 and we really started to pick it up,” McMorris said. “Everybody needed to come together, and we’re all a big brotherhood.”

The Nederland brotherhood helped McMorris earn The News’ Player of the Week honor.

McMorris completed 11 of 17 passes for 228 yards, his longest a 61-yard strike to fellow senior Bryson Garrett.

This was not McMorris’s first big passing game of the season, however. He threw for 251 yards and two fourth-quarter touchdowns against Silsbee in Week 3, but also tossed two interceptions in a 14-for-26 evening.

The week before against Beaumont United, McMorris nearly broke 200 yards on 18-of-31 passing with a pick.

Something changed, however, to help the Bulldogs break through in the win column.

“I got more relaxed,” he said. “I trusted my o-line more. I just gave it to my playmakers.”

Bulldogs coach Monte Barrow said McMorris played more comfortably in the pocket, although he made some plays out of it. McMorris just wasn’t in as much of a hurry to get outside it, Barrow added.

As a team, the Bulldogs simply put a winless start to the season behind them.

“I think the players did what we asked them to do, which was kind of cleanse the mind of the 0-3 part and everything’s starting over, bring what we can learn from our non-district schedule, which we played three really good teams that really taught us a lot about us,” Barrow said.

Other big performances of the week from Mid- and South County teams:

In Memorial’s 27-8 win at Galena Park on Thursday: