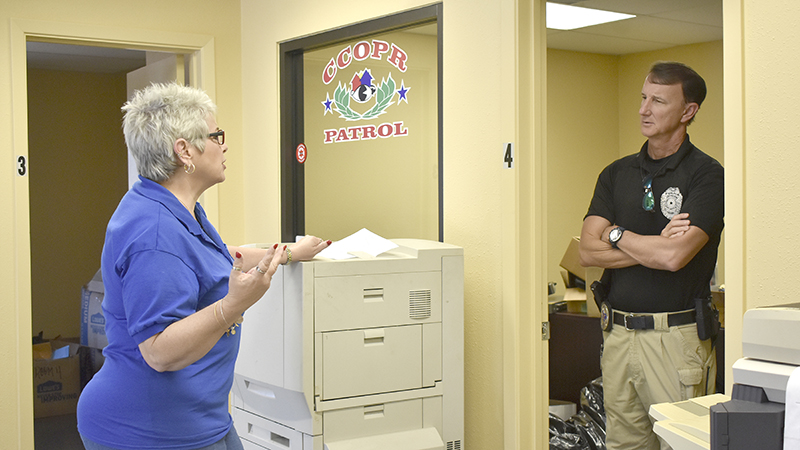 Neighborhood watch groups are getting back into action in Port Arthur — though some have continued to stand guard.

At one time there were 18 active groups. That number has decreased considerably in the last few years.

“Most of our founding members either passed away or their children moved them up north so not to be in a hurricane zone,” said Jody Holton, president of PANAC and of Griffing Park Neighborhood Watch.

He recently sat down with Port Arthur Police Det. Mike Hebert at the reopened Ryman Building to talk about the groups.

Hebert said there are six active groups, which include a Stonegate area/golf course area, Port Arthur (covers Houston Avenue to Memorial Boulevard and Lakeshore Drive to Gulfway Drive), Lakeview, Pear Ridge, El Vista and Park Place, which is trying to get reorganized.

Holton said officers attend the meetings and there is communication between the members and police regarding issues in the city.

Eric Beal, an active member and former president of the Concerned Citizens of Port Arthur, said they watch out for crime and quality-of-life issues.

“Some of us helped our neighbors get a street light installed by Entergy; if the light is burned out we call,” Beal said.

“Overgrown bushes can also be a safety problem, creating an area for kids or others to congregate and elderly ladies may be afraid to walk up to their doors at nighttime.”

Police and volunteers come out and cut down the bushes and cleanup the area so they can see when they walk up to their door.

Beal said his area of town doesn’t have a lot of violent criminal activity; maybe people congregating near Rose Hill by the seawall, but no violent incidents.

Neighborhood watch members can be very active or not, it depends on the person.

“You go about your normal activities,” Beal said. “If you see something that’s an issue, get the address and get with your officer liaison or other members in the group and say ‘hey, do I need to watch out for this’?”

Since Harvey said CCOPA members have been active to a limited extent. They do have a meeting planned in October.

Hebert said the neighborhood groups are helpful because of the information that is shared with police.

And while PANAC and Neighborhood Action Groups are important tools for community policing and quality-of-life issues, a person doesn’t have to be a member to keep an eye on their neighborhood, Hebert said.

Those interested in becoming a member of a neighborhood watch group can attend a PANAC meeting, which are held at 7 p.m. on the third Monday of the month in the Ryman Building or they can call Det. Hebert at 409-983-8649.